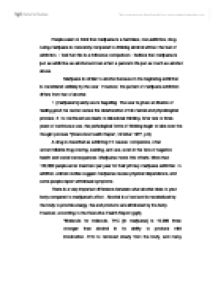 People seem to think that marijuana is a harmless, non-addictive, drug.

People seem to think that marijuana is a harmless, non-addictive, drug. Using marijuana is constantly compared to drinking alcohol without the fear of addiction. I feel that this is a ridiculous comparison. I believe that marijuana is just as addictive as alcohol and can affect a person's life just as much as alcohol abuse. Marijuana is similar to alcohol because in the beginning addiction is considered unlikely by the user. However, the pattern of marijuana addiction differs from that of alcohol. 1. [marijuana's] early use is beguiling. The user is given an illusion of feeling good; he cannot sense the deterioration of his mental and physiological process. 2. Its continued use leads to delusional thinking. ...read more.

Marijuana is also both emotionally and mentally addictive. Now that my friends are addicted to marijuana, it has developed into part of who they believe they are. They don't call their friends who do not use, and tend to hang out with others that do. Marijuana is something that is always on their mind, whether they're thinking about the next time they will be able to get high, or where they're going to get their next dime bag. When someone is addicted to marijuana eventually their friends and the people close to them only know how they act when they're stoned. This is because they no longer do anything without first smoking-up. Their constant abuse is due to the misconception that marijuana is what they need to solve their problems. ...read more.

However, my friend Chris informed me that he never spends less than twenty dollars a day.(Wiley pg1) That adds up to $140 a week, $560 a month, or $6,720 a year. He's been smoking for three years now. That adds up to $20,160 dollars. He could have bought himself a 2002 car for himself this Christmas in cash. Marijuana addicts tend to live below the lifestyle they could be living at due to the lack of cash flow. The money isn't only being spent on marijuana, many people also buy extra food to appease the "munchies". Most users know that they cannot afford their habit and continue to spend the money anyway. This is a sign of addiction. Marijuana affects a person's ability to make productive decision and also empties their wallets quicker than necessary. People need to stop kidding themselves and realize that substance abuse is harmful regardless of which substance you are using. ...read more.