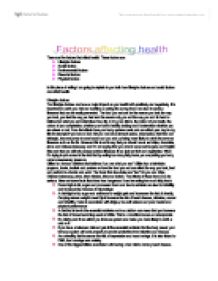 There are five factors that effect health. These factors are: > Lifestyle choices > Social factors > Environmental factors > Financial factors > Physical factors In this piece of writing I am going to explain to you both how lifestyle choices and social factors can affect health. Lifestyle choices You lifestyle choices can have a major impact on you health both positively and negatively. It is important to watch you diet and nutrition as eating the wrong foods can lead to serious illnesses that can be easily prevented. The food you eat can be the reason you look the way you look, you feel the way you feel and the reason why you act the way you act. Its hard to believe but what you eat determines how oily or dry your skin is, the colour of your teeth, the colour of your complexion, whether your hair is healthy looking and it determines whether you are obese or not. Your diet effects how your body systems work and can effect your day to day life for example if you have a bad diet you can have stomach pains, chest pains, feel tired and lethargic, become prone to sore heads and you end up being more likely to catch the common illnesses such as the flu. However this is not to say that you should never eat chips, chocolate, pizza and Chinese takeaway and I'm not saying that you should never eat burgers and English fries and that you will only escape serious illnesses if you just eat fruit and vegetables. ...read more.

Jamie put across that by having a better diet; * Your thinking power will be boosted * Your mood will be lifted * Reduced stress * Boost you vitality * Give you a healthier heart Jamie Oliver helped people to realize that when it comes to heart disease, a healthy diet is the prime player: * Helps fight ageing and slows down your body's natural deterioration * Helps chase away common colds and flu. * Prevents asthma and common headaches * Attacks bacteria and viruses * Makes your skin, hair and nails glow with health * Supply chemicals in the blood that can unclog arteries, reduce cholesterol, create blood clot solvents and send hormones to relax artery walls reducing blood pressure. Jamie Oliver's campaign Jamie Oliver is a well known and respect chief that started a campaign to make people realise that Britain's diet was getting worst instead of better. To grab peoples attention Jamie Oliver decided to start with school dinners and decided that something needed to be done. His aim was to "ban the junk in schools and get kids eating fresh, tasty nutritious food instead." His campaign was massive and became a popular television program. Jamie Oliver campaigned through, posters, leaflet, interviews, and the media. His campaign changed the state of mind of people of all ages and it made the government realize that healthy eating starts in school. Through Jamie's campaign the government has started new health promotion campaigns based on healthy eating. ...read more.

By having the media behind him it made it easier for him to get the message of healthy eating across to the government and therefore pressure was put on the government to provide school children with the right foods. Below are some facts that Jamie found out while he was campaigning. � One quarter of teenagers are already obese. � 14% of boys and 17% of girls between the ages of two and 15 are overweight. � Nearly one quarter of adults are already obese. � Kids with fat parents are twice as likely to become obese. � Kids who are obese by the age of 12 are 85% more likely to remain obese into adult life. � Kids who are obese in their early teens are twice as likely to die by the age of 50. Another campaign that was launched to try to combat the increasing rise in obesity was the television program called "Super Sized Me". This was a program in which a man had to eat nothing but Mc Donald's for a set period of time. Before the man started his trail he was weighed and his blood pressure and cholesterol levels where taken. The same was done after the trail. There was an extraordinary change in the man's overall health. The objectives of this program were to make people aware of the damage that can become of overeating and eating the wrong foods. From this program Mc Donald's have made changes to their menu. They are now providing salad, fruit and fruit drinks. ...read more.