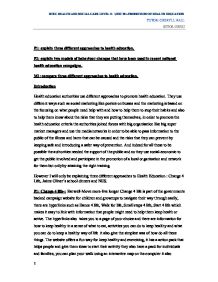 P1: explain three different approaches to health education. P2: explain two models of behaviour changes that have been used in recent national health education campaigns. M1: compare three different approaches to health education. Introduction Health education authorities use different approaches to promote health education. They use different ways such as social marketing like posters on busses and the marketing is based on the focusing on what people need help with and how to help them to stop their habits and also to help them know about the risks that they are putting themselves, in order to promote the health education criteria the authorities joined forces with big organisation like big super market managers and use the media networks in order to be able to pass information to the public of the illness and harm that can be caused and the risks that they can prevent by keeping safe and introducing a safer way of prevention. And indeed for all these to be possible the authorities needed the support of the public and so they use social-economic to get the public involved and participate in the promotion of a local organisation and network for them but only by attaining the right training. ...read more.

They also give out leaflets on any issue of health by running a stop smoking clinic that offers patches to people to help them stop smoking. P2: Models of behaviour change-: A lot of things today have changed in this generation from how thing used to be which is due to the change in gender role, social classes, race, ethnicity, income, self-efficiency and lots more. Example of model behaviours are Binge drinking and obesity amongst children and young people. Binge drinking-: Binge drinking is bad for our health and Britain is one of the known countries to binge drink especially with teenager but mostly among women. It has now become a matter of media, social and political issue. In the past it was the drinking of large amount of alcohol at once that was considered a mans thing and was seen as normal behaviour between them, however in the past women did not go out at night time to binge drink they stayed at home to look after their children whilst the men went to work then to the bar after work with their friends to drink before going to their wife to eat what they have prepared, but the main focus of binge drinking today is women and young people. ...read more.

Even though binge drinking is dangerous internally, externally, physically and criminally it is socially acceptable because young people who go out with friends at night or any time of the day are expected to binge drink and get drunk. Stop smoking-: the socioeconomic factor that might influence the ability of the NHS might be the amount of information that is available of the websites for the public to access. The influence can also be the changes in the accident patterns that which might appear that some patients might be treated 4 hour after they arrive at the NHS and also the money that is spent every year and the amount that is lost every year. The NHS socioeconomic factors that influence smoking is that people think that smoking helps them to come down when they are stress are depressed this is more likely to happen with single parents who work long hours to look after their children and minimum paid workers. Pear pressure is one of the factors of socioeconomic because people might feel that they need to smoke to get away from the troubles because their friends are or they might think that if they do not smoke with the group that they are with the might be caste out of that particular group so the yield to the group pressure. ...read more.

This is good descriptive essay but it is lacking in depth and research.

The writer needs to research the campaigns that they discuss and give some background information. It would help for the merit work to look at different approaches to health promotion and discuss the application. This would greatly enhance the work.