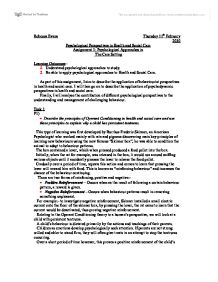 Psychological Approaches in The Care Setting

Rebecca Evans Thursday 11th February 2010 Psychological Perspectives in Health and Social Care Assignment 1: Psychological Approaches in The Care Setting Learning Outcomes:- 1. Understand psychological approaches to study. 2. Be able to apply psychological approaches to Health and Social Care. As part of this assignment, I aim to describe the application of behaviourist perspectives in health and social care. I will then go on to describe the application of psychodynamic perspectives in health and social care. Finally, I will analyse the contribution of different psychological perspectives to the understanding and management of challenging behaviour. Task 1 P1) * Describe the principles of Operant Conditioning in health and social care and use these principles to explain why a child has persistent tantrums. This type of learning was first developed by Burrhus Frederic Skinner, an American Psychologist who worked mainly with rats and pigeons discovering main key principles of learning new behaviours using the now famous "Skinner box", he was able to condition the animal to adapt to behaviour patterns. The box contained a lever, which when pressed produced a food pellet into the box. Initially, when the rat for example, was released in the box, it would run around sniffing various objects until it accidently presses the lever to release the food pellet. Gradually over a period of time, repeats this action and comes to learn that pressing the lever will reward him with food. This is known as "reinforcing behaviour" and increases the chance of the behaviour continuing. There are two forms of reinforcing, positive and negative:- * Positive Reinforcement - Occurs when as the result of following a certain behaviour pattern, a reward is given. * Negative Reinforcement - Occurs when behaviour patterns result in removing something unpleasant. For example:- to investigate negative reinforcement, Skinner installed a small electric current onto the floor of the skinner box, by pressing the lever, the rat came to learn that the current would be deactivated, thus proving negative reinforcement. ...read more.

Stage 3 (age 3-6) - At this stage of a child's development there is rapid social, physical and intellectual development. Through interaction with others, new skills are developed and an increased self-confidence is formed. By welcoming a child's curiosity about life to explore and learn new skills through play and life experiences together with new physical new initiative is developed. However, negativity at this stage such as parents ignoring questions about the world in which they live and prevention of play and physical activities, will result in a reduction in the child's curiosity about the world in which they live and confidence, competence and initiative will reduce, leaving the child with feelings of lack of self worth and guilt. Stage 4 (age 6-12) - At this stage children become concerned with how things are made and how they work. Teachers, parents and siblings all play a part at this stage of development. Children begin to compare themselves to their peers to assess their own achievements and this is essential in the development of self-worth. A sense of "industry" is developed with the individual encouraged to undertake tasks of a realistic nature where success is likely this encourages high self esteem and a sense of competence. However "Inferiority" results if the child is pushed into doing tasks they are not ready to do. A lack of guidance and encouragement, coupled with criticism for failure will lead the child with a low self esteem and overall negative self concept. Stage 5 (ages 12-18) - Erikson likened the psychological turmoil of teenage years to "storm and stress" where ones self concept is affected by several factors:- * Physical changes to the body causing an affected body image and which may have an effect on the individuals sense of self belief. * Intellectual development which allows the individual to be aware of current levels of intelligence and the potential of what careers may lie ahead. ...read more.

However, again Joe's dominant Id comes to the fore. He is impulsive, careless of others' feelings and does not think through the consequences of his actions. Classically, he is inclined to aggression to people of dominant Id. 3. Humanistic Approach to Joe's Behaviour The humanistic approach to Health and Social care describes the understanding of human experience from the individual's position focusing on free will and the capability of making choices. Abraham Maslow and Carl Rogers are two psychologists associated with this approach. Maslow, an American psychologist constructed his "Hierarchy of Needs" explaining requirements every human being needs in basic needs to eventually achieve self-actualisation (achieve full potential). From information given, it is evident that Joe has not fulfilled the majority of his basic needs. I feel he is at the bottom of Maslow's hierarchy he is getting the basic physical needs (food, drink, warmth, etc...). However, it can be seen that his safety and security is not achieved because he remains anxious, depressed and aggressive. Until such emotions are addressed Joe will not be able to develop accordingly to Maslow's Hierarchy of Needs. Joe can be likened more effectively to the theories of Carl Rogers, a psychologist "particularly interested in the concept of self" (Stretch, B, 2007, Pg388). Self concept is the way in which we see ourselves involving physical and biological traits. He has two key terms he uses "internalise" in the way in which we perceive outside information and build our sense of self. In Joe's case, he has a low self worth and tries to compensate by being dominant and aggressive. He is generally depressed which reinforces the feelings of inadequacy. Initially, staff and clients were supportive and friendly towards him which would help him value himself and increase self esteem. However, increasing aggression, dominance and bad behaviour causes a reverse attitude by clients and staff alike and this in turn contributes to Joe's poor behaviour affecting his self esteem in a negative way. The prospect of being made to leave the home could leave Joe feeling troubled and unhappy and have a negative concept of his ideal self. ...read more.

This is a very good essay that includes excellent descriptions of some psychological theories. The behaviourist approach is described well as is Erikson's theory.

The writer could extend the discussion of Freud and include far greater detail of the Humanistic approach.

A very good attempt at application though.