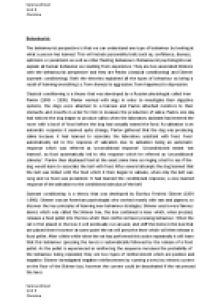 ﻿Selena Ahmed Unit 8 Christine Behaviourist: The behaviourist perspective is that we can understand any type of behaviour by looking at what a person has learned. This will include personality traits such as; confidence, shyness, optimism or pessimism as well as other fleeting behaviours. Behaviourist psychologists can explain all human behaviour as resulting from experience. They are two associated thinkers with the behaviourist perspective and they are Pavlov (classical conditioning) and Skinner (operant conditioning). Both the theorists explained all the types of behaviour as being a result of learning everything i.e. from shyness to aggression, from happiness to depression. Classical conditioning is a theory that was developed by a Russian physiologist called Ivan Pavlov (1849 ? 1936). Pavlov worked with dogs in order to investigate their digestive systems, the dogs were attached to a harness and Pavlov attached monitors to their stomachs and mouths in order for him to measure the production of saliva. Pavlov one day had noticed the dog began to produce saliva when the laboratory assistant had entered the room with a bowl of food before the dog had actually tasted the food. As salivation is an automatic response it seemed quite strange, Pavlov gathered that the dog was producing saliva because it had learned to associate the laboratory assistant with food. Food automatically led to the response of salivation due to salivation being an automatic response which was referred as ?unconditional response?. Unconditioned meant ?not learned?, as food automatically led to this response which he referred as ?unconditional stimulus?. Pavlov then displayed food at the exact same time as ringing a bell to see if the dog would learn to associate the bell with food. ...read more.

For e.g. Between birth and the age of one. The Humanistic Perspective: Humanistic psychology looks at human experience from the viewpoint of the individual. It focuses on the idea of free will and the belief that we are all capable of making choices. They are two psychologists that are associated with this approach they are Abraham Maslow and Carl Rogers. Abraham Maslow: Maslow (1908 ? 1970) was an American psychologist who believed that we are all seeking to become the best we can possibly be; spiritually, physically emotionally and intellectually. He referred this as self-actualisation which is tendency we all possess as human beings to become the best that we all can be in all aspects of personality. He developed a theory known as the hierarchy of needs which he explained every human being requires certain basic needs to be met before they can progress and approach to the next level. Carl Rogers: Rogers (1902 ? 1987) was particularly interested in the concept of self. There many aspects of self but two are especially important here. Self ? concept refers to how we view ourselves, this includes physical and biological attributes such as being male or female, blonde or brunette, tall or short along with personality traits such as being kind, humble, assertive and hard working. Self- concept is formed at an early stage of life and young children internalise which is when we take in information from the outer world and build it into sense ourselves which then becomes a part of our feelings, thoughts and beliefs about who we are and what we expect from the society around us, other peoples judgments of them. This becomes a part of one?s self concept, for e.g. ...read more.