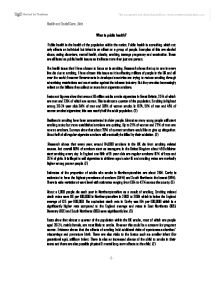 What is public health? Public health is the health of the population within the nation. Public health is something which not only affects an individual but infact is an effect on a group of people. Examples of this are alcohol abuse, eating disorders, mental health, obesity, smoking, teenage pregnancy and vaccination. These are all listed as public health issues as it affects more than just one person. The health issue that I have chosen to focus on is smoking. Research shows that up to one in every five die due to smoking. I have chosen this issue as it is affecting millions of people in the UK and all over the world; however Governments in developed countries are trying to reduce smoking through advertising restrictions and court action against the tobacco industry. But they are also increasingly reliant on the billions they collect on taxes from cigarette smokers. Facts and figures show that around 10 million adults smoke cigarettes in Great Britain, 25% of which are men and 23% of which are women. This is almost a quarter of the population. Smoking is highest among 20-24 year olds 34% of men and 30% of women smoke. In 1974, 51% of men and 41% of women smoked cigarettes; this was nearly half the adult population. (2) Declines in smoking have been concentrated in older people. Almost as many young people still start smoking today but more established smokers are quitting. Up to 21% of women and 27% of men are now ex-smokers. ...read more.

For both men and women cigarette smoking is more common amongst manual social groups than among non-manual groups, and is lowest among higher managerial and professional classes. In 2005, 32% of men and 29% of women in routine and manual occupations smoked compared to 18% of men and 16% of women in managerial professional occupational. (1) There is no other single avoidable factor causes such a high proportion of deaths, hospital admissions or consultations with general practitioners. This burden of ill health and early death falls disproportionately on poorer people. People in poorer social classes are more likely to die early due to a variety of reasons. Among men, premature deaths from lung cancer are five times higher among those in unskilled manual work compared with those in professional jobs. Among low income lone parents, the poorest family group, over 70% smoke. It is estimated that over three-quarters of prisoners, many of whom come from socially deprived sections of the community, smoke. People with mental health problems are also more likely to be smokers. Smoking is very high among the many Muslims living in the UK; smoking prevalence (particularly among men) remains high. For example, in England in 2004 the overall prevalence of smoking was 40% in Bangladeshi men and 29% in Pakistani men compared with 24% among the male general population There are not many smokers about who started smoking after the age of eighteen. In fact, the majority of smokers took up the habit in their early or mid teens. ...read more.

I personally think that they should put up the prices, making tobacco less affordable. The government are considering banning selling cigarettes from vending machines; I personally think this would be a very good idea. Reasons being are children are still at ease of accessibility of buying tobacco illegally in pubs, bars, hotels and social clubs. Evidence shows there are 70,000's of them, selling 750 million cigarettes a year. In my opinion the banning of cigarette vending machines would reduce the outlets available to young people and therefore restrict their access to cigarettes. On October 1st 2007, the law for selling tobacco also changed. It is now illegal to sell tobacco products to anyone under the age of 18 (an increase from 16) in England and Wales. However I don't think that raising the legal age of buying tobacco has been really effective. Reason being is that teenagers and children underage have been able to get hold of cigarettes for the past many years. Of which many of these young smokers say they buy their cigarettes from newsagents and corner shops. Yet in some areas within the UK the rate of smoking has slightly dropped No Smoking Day is also an excellent opportunity to stop smoking and there are affective free and friendly services available locally. It is an annual health awareness campaign that helps smokers that want to stop. On No Smoking Day, up to 1.5 million smokers make their first quit attempt and millions more use the day to take a step towards stopping smoking. Bibliography Throughout this assignment I have put numbers in brackets, next to key terms/skills or definitions. ...read more.