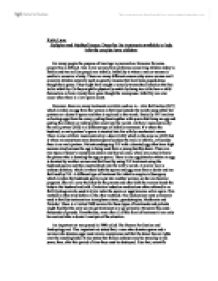 Katie Lane Religion and Medical Issues: Describe the treatments available to help infertile couples have children For many people the purpose of marriage is procreation. However for some people this is difficult. One in ten women have problems conceiving children today in Britain and two million people are infertile. Infertility is when a man or women is unable to conceive a baby. There are many different reasons why some women can't conceive children naturally such as genetic reasons that have been passed down though their genes. They might have caught a s******y transmitted infection that has led to infertility. Or they might be physically unable by being too old to bear a child themselves or have already have gone though the menopause. ...read more.

but is when an anonymous man donates sperm because the male is infertile, or because there is no male partner. Patients undergoing IVF with a donated egg often have high success rates because the egg is being used from a young healthy donor. There are two types of donor's anonymous donors and known ones, where you actually know the person who is donating the egg or sperm. There is also egg donation where an egg is donated by another women and fertilised by using IVF treatment using the husbands sperm and then inserted back into the wife's womb. A similar way is embryo donation, which is where both the sperm and egg come from a donor and are fertilised by IVF. ...read more.

An important act was passed in 1990 called The Human Ferilisation and Embryology act. This important act stated that, a man who donates sperm and a woman who donates eggs must remain anonymous and that the donor has no rights over the resulting baby. It also states that frozen embryos may be stored up to ten years, then, after this period of time they must be destroyed. Also that, scientific experiments may be carried out on an embryo for up to 14 days and after this period of time it must not be kept alive. The world's first test tube baby was Louise Brown who was born in a British hospital on 25 July 1978 and since then there have been millions more successful babies born from infertility treatment all across the world. ...read more.