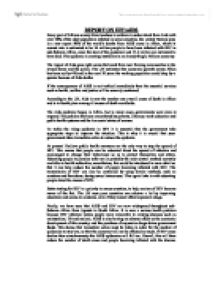 REPORT ON HIV/AIDS Every part of African society from teachers to soldiers is under attack from Aids with over 30% of the adult population infected in some countries, the United Nations says in a new report. 80% of the world's deaths from AIDS occur in Africa, which at current rate is estimated to be 34 million people to have been infected with HIV in sub-Saharan Africa, since the start of the pandemic and 11.4 million are estimated to have died. This epidemic is creating instability in an already fragile African economy. The impact of Aids goes right across the board from rural farming communities to the armed forces and the police. ...read more.

The Aids epidemic began in Africa, but in many cases governments were slow to respond. The problem has been exacerbated by poverty, illiteracy, weak education and public health systems and the low social status of women. To tackle the rising epidemic in HIV it is essential that the government take appropriate steps to improve the situation. This is why it is crucial that your government takes immediate action to reduce the epidemic. At present I believe public health measures are the only way to stop the spread of HIV. This means that people can be educated about the spread of infection and encouraged to change their behaviours so as to protect themselves and others. ...read more.

The UN says poor countries can achieve a lot by improving education and access to condoms, even if they cannot afford expensive drugs. Finally, we have seen that AIDS and HIV are now widespread throughout sub-Saharan Africa from Uganda to South Africa. It is now a serious health problem because HIV infection makes people more vulnerable to existing diseases such as malnutrition, TB and malaria. AIDS is also having an adverse effect on the economic development of this country, and the purchase of expensive drugs drains government funds. This shows that immediate action must be taken in order for the number of epidemics to stay low, so that the economy will not be affected as much. If HIV cases decline then simultaneously the AIDS epidemics will fall too. Overall, this will then reduce the number of death cases and people becoming infected with the disease. ...read more.