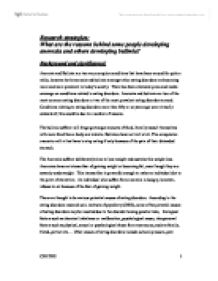 Research strategies:What are the reasons behind some people developing anorexia and others developing bulimia?

Research strategies: What are the reasons behind some people developing anorexia and others developing bulimia? Background and significance! Anorexia and Bulimia are two very complex conditions that have been around for quite a while, however both anorexia and bulimia amongst other eating disorders are becoming more and more prevalent in today's society. There has been extensive press and media coverage on conditions related to eating disorders. Anorexia and bulimia are two of the most common eating disorders or two of the most prevalent eating disorders around. Conditions relating to eating disorders more than fifty or so years ago were virtually unheard of, this could be due to a number of reasons. The bulimic sufferer will binge grotesque amounts of food, literally assault themselves with more food than a body can tolerate. Bulimics have no limit at all. The compulsive overeater will at last have to stop eating if only because of the pain of their distended stomach. The Anorexic sufferer deliberately aims to lose weight and sustains this weight loss. Anorexics have an intense fear of gaining weight or becoming fat, even though they are severely underweight. This intense fear is powerful enough to make an individual diet to the point of starvation. An individual who suffers from anorexia is hungry, however, refuses to eat because of the fear of gaining weight. There are thought to be various potential causes of eating disorders. ...read more.

In addition, the treatment provided currently to people suffering from eating disorders is not specific, taking this in to account then there is a real relevance in finding out if there is any sort of personality difference between anorexic or bulimic suffers in order to help future treatment provided to be specific. The main research question is to find out in the context of eating disorders: What are the reasons behind some people developing anorexia and others developing bulimia? The sub-research question for this research is, what role personality plays in making individuals more prone to suffering from bulimia instead of anorexia? The objectives of the research are to provide a description of bulimia and anorexia. To provide relevant evidence of past and present research. To come up with a set of questions that would be relevant to a personality questionnaire, and to carry out this questionnaire on a sample. In addition, the objective of this research is to conduct a semi-structured interview with sample of people and record the data in the relevant format and finally analyse the data to determine whether there are identifiable differences in personality traits between the two suffers. Method: The aim of the research is to gain a deeper understanding of the personalities of people suffering from eating disorders, by drawing upon various theories. Also to gain a better understanding of the lives of people suffering from eating disorder and also to be able to provide better treatment in future if any differences are found. ...read more.

The main problem faced by the snowball sampling technique is that it may not provide a representative sample of the population, leading to problems when trying to generalise with the research. This difficulty is difficult to avoid due to the initial problems of gaining access. Data collection method and analysis plan: Data will be collected in the form of a questionnaire, which will consist of open and closed question to which the response may require either one-word answers or a more detailed response. The data will also be collected in the form of a semi-structured face-to-face interview. For the questionnaire, tests of statistical significance will be used in order to evaluate the hypothesis to find out if there are any correlations. This method seems to be the best if an attempt to generalise will be made. The level of statistical significance will be 5%. In addition, the bi-variate analysis method will be used in order to find out if there are any links between the personality traits and people developing an eating disorder. The research for the proposal will be carried out over a number of weeks, gathering information and contacting various organisations. The personality questionnaire should take about 10-15minutes to complete, the interview will also have a time limit of about 45 - 50 minutes. The interviews and the questionnaires with the clients will be carried out over a period of two days, giving the clients the choice to choose which session they would like to attend, in advance via the post. The data collected will be analysed using SPSS. ...read more.