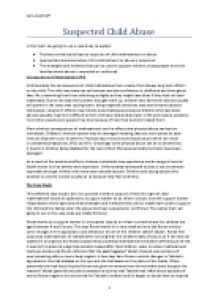 Safeguarding Children and Young People: This essay looks at how to spot child abuse, what to do if child abuse is spotted and how to support children and young people who are victims of abuse.

﻿Ian Lowenhoff Suspected Child Abuse ________________ In this task I am going to use a case study to explain: 1. The factors that would lead to suspicion of child maltreatment or abuse. 2. Appropriate responses when child maltreatment or abuse is suspected 3. The strategies and methods that can be used to support children, young people and their families where abuse is suspected or confirmed. Consequences of Maltreatment (P3) Unfortunately the consequences of child maltreatment are usually if not always long term effects on the child. The child may have low self esteem and low confidence in childhood and throughout later life, preventing them from achieving as highly as they might have done if they had not been maltreated. Due to the way their parents brought them up, children who have been abused usually will parent in the same way causing harm, being neglectful and they may even become abusers themselves. Long term effects may include social inadequacy because children who have been abused s******y may find it difficult to form intimate relationships later in life and may be unable to trust other people even people they love because of how their parents treated them. More obvious consequences of maltreatment are the effects that physical abuse has had on individuals. Children?s immune system may be damaged meaning they are more prone to auto-immune disorders such as arthritis. Physical abuse may include s****l abuse which can result in unwanted pregnancies, STDs and STIs. Shockingly some physical abuse can be so severe that it results in children being disabled for the rest of their life because bodily functions have been damaged. As a result of the emotional effects of abuse individuals may experience a wide range of mental health issues such as anxiety and depression. Unfortunately attempted suicide is not uncommon especially amongst children who have been s******y abused. Children and young people who attempt to commit suicide usually do so because they feel worthless. ...read more.

An effective way to actively reassure individuals that they are doing the correct thing when disclosing sensitive information is to promote any signs they show of self-confidence or assertiveness. The best way to support children and young people is to empower them. Empowering children and young people can be achieved by doing the things I have already mentioned such as reassuring them, promoting signs of their self-confidence and assertiveness. Empowerment can also be gained by giving individual information such as: 1. What their rights are as young people e.g. the right to play, this way they can feel better about themselves. 2. Who they can contact for help when they are in need and how they can do this e.g. their social worker, the police or child line. 3. How to respect their bodies and stay safe. For example how to stay clean (hygienic) and healthy (exercise and food). Staying healthy and respecting your body boosts your self-esteem a key aspect of empowerment. How parents and families may be supported (case study continued) (P5) It is vitally important that the local authorities involved in a case of child abuse or maltreatment build a good relationship with the family (especially the parents) which has been affected so that they can get the best possible idea of what abuse or maltreatment has occurred and how it can be dealt with. In my case study Tallulah had been neglected by her mother and abused by her mother?s partner. In order to explain the strategies available for working with parents and families I am going to continue my case study from earlier. The investigation into the abuse and maltreatment of Tallulah found that most of the abuse had been committed by her mother?s partner. Tallulah?s mother decided to split up with her abusive partner who was convicted for abuse and maltreatment. Despite how Tallulah?s mother had neglected her, allowing the abuse to occur, Tallulah still wanted to live with her mother and she was able to return to her home to be with her mother. ...read more.

Before a child is added to the register a multi-disciplinary team will meet to discuss the individual?s case in a conference. They will outline the type of abuse or maltreatment that the individual is in danger of and they will discuss the action that will be taken if the individual?s situation becomes more dangerous. I think having child protection registers is a policy that is justified because they are an effective way to monitor the welfare of children or young people believed to be in danger of harm or maltreatment. Once it has been found that an individual has committed a s****l offence against a child or young person they are put on the s*x offenders register so that they are barred from working with children or young people. The s*x offenders register is run by the police and was set up in 1997 under the s*x Offenders Act 1997. Conclusion (D2) In conclusion I believe the responses to suspected maltreatment or abuse of young people or children are justified because they are effective and efficient in safeguarding children and young people. I think that the safeguards in place such as the vetting safeguards are further justified by the case of Holly Wells and Jessica Chapman where better vetting would have prevented their abuse and death. I also think that the concern the Every Child Matters agenda raises for professionals and local authorities working closely together is justified because a child?s or young person?s welfare should always be paramount. I think that whistleblowing and reporting of danger is effective because policies make reporting faster and easier. I also think that responding to the notification of a child or young person being in danger by placing a care order on the individual is justified because it swiftly removes the individual from further possible danger. Finally I believe that placing individuals who s******y abuse a young person or child on the s*x offenders register is the best and most fair way to prevent those individuals from committing more acts of abuse in the future. ...read more.