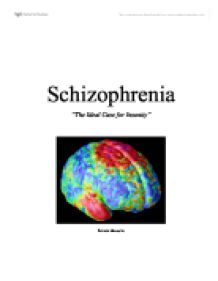 Schizophrenia "The Ideal Case for Insanity" Patrick Marcotte When a person hears the term Schizophrenia, the first thought that comes to mind is "Crazy" or "Insanity." Often confused with Disassociate Identity Disorder (a.k.a. multiple personalities), Schizophrenia is a psychiatric disorder that is characterized by a wide variety of symptoms and the disorganization of thought processes and emotions. Although Schizophrenia is considered one of the most severe and frequent forms of mental disorders, scientists continue to search for a cure and new forms of treatment for this incurable disease whose causes are still unknown. Of all the functional psychoses, Schizophrenia is by far the most incapacitating and a devastating brain disease which has torn apart the lives of many including victims of this disease and their families. From two greek roots meaning "split mind", attempting to define the term "Schizphrenia" is like trying to find a needle in a haystack. The most interesting fact is that approximately one percent of the population in Canada suffer from Schizophrenia with $7.8 billion dollars being being spent on Mental Health care and occupying 15 percent of hospital beds. ...read more.

are two recent additions to the categorization for distinguishping the types of Schizophrenia. Differentiating the two, proposes that underlying processes may help to explain where and how Schizophrenia is developed. Schizophrenia affects a persons ability to "think straight" creating the inability to be able to sort out what is relevant and what is not relevant to a situation. The first signs of Schizophrenia often appear as confusing, or even shocking, changes in behavior. Major symptoms of Schizophrenia include irritability, withdrawl, indifference, loss of interest in personal appearance, loss of normal funtion, depression, hearing voices, the belief that someone is watching them or controlling them, the belief that their thoughts are being broadcasted so that others can know what they are thinking and emotional disturbances. Often patients with Schizphrenia will experience behaviours such as delusions and hallucinations. Their thoughts are sometimes hard to follow because of disordered thinking. People suffering from Schizophrenia are often anxious and frightened. Even though the actual causes of Schizophrenia are unknown, there are many theories to explain its causes and existance but it does appear that Schizophrenia has both enviromental and biological origins. ...read more.

In conclusion, one can see that Schizophrenia is one that schizophrenia is a disabling disease of the brain and that to date, with symptoms that can render a person helpless, alone, and afraid, no single cause can be identified in the development of Schizophrenia but perhaps with time and patience, scientists and reasearch will continue to improve the current forms of treatment which consist mainly of psychotherapy and prescription drug usage and perhaps one day, solve the puzzel that has baffled scientists around the world for centuries and discover the long awaited cure. We must remember that people suffering from this horrifying disorder are human and have real fears and emotions, just like everyone else. They are not "Crazy" or "Insane." If someone you love is ever faced with Schizophrenia, do not turn your back on them, but rather see that they are well taken care of and receive the treatments necessary to live a normal and happy life. Reference List Feldman, Robert S. & Collins Joan E. & Green Judy M. (2004) Essentials of Understanding Psychology, Second Canadian Edition. McGraw-Hill Ryerson Limited, a Subsidiary of The McGraw-Hill Companies, Canada. ...read more.