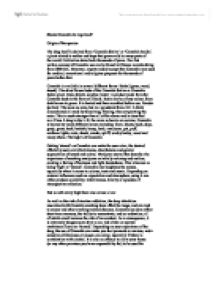 Should Cannabis be legalized? Origin of the species: The drug itself is derived from 'Cannabis Sativa' or 'Cannabis Incida', a plant related to nettles and hops that grows wild in many parts of the world. Cultivation dates back thousands of years. The first written account of Cannabis use can be found in Chinese records dating from 2800 B.C. However, experts widely accept that Cannabis was used for medical, recreational and religious purposes for thousands of years before that. Cannabis is available in several different forms: Herbal (grass, weed, skunk): The dried flower buds of the Cannabis Sativa or Cannabis Indica plant. Resin (block, soapbar, hash): A product made from the Cannabis buds in the form of a block. Resin can be of any colour, from dark brown to green. It is heated and then crumbled before use. Powder (pollen): The same as resin, but in a powdered form. ...read more.

It is also an offence to allow your house (or any other premises you have responsibility for) to be used for growing Cannabis or smoking it. Cannabis contains more tar than tobacco, and has a higher concentration of carcinogens (cancer-causing agents). Cannabis became a controlled substance in Britain in 1928. Cannabis is controlled under the Misuse of Drugs Act and is categorised as a Class C drug, of course it was a Class B drug but the present Government decided to lower it to Class C drug. The maximum penalty for supply, dealing and production (including cultivation) and trafficking remains at 14 years imprisonment. The maximum penalty for possession has been reduced from 5 years to 2 years imprisonment. Is Cannabis harmless? Yes: � Cannabis is less addictive than amphetamines, tobacco or alcohol, and does less damage to the body. � A Government report found that high use of Cannabis isn't associated with major health or sociological problems, unlike most other harder drugs. ...read more.

Of course many people now are neglecting to notice that Cannabis is still illegal. Although a survey in America concluded that smoking Cannabis was more popular than surfing the net. I do not think it should be legalised at the moment, many people feel strongly about younger people trying it. And that it would lead to an increase in other drug use. As for Cannabis being a 'gateway' to harder drugs, again it is the user's decision whether or not he/she wants to try the harder drugs. In some situations, the same as smoking there might be 'peer pressures' and other factors that might cause you to take harder drugs such as heroin, LSD etc. But these situations can be combated, if your friends are doing something you don't want to do, it's up to you to make a decision about your future relationship. So it is my final verdict that Cannabis should remain a Class C drug for the time being. ...read more.