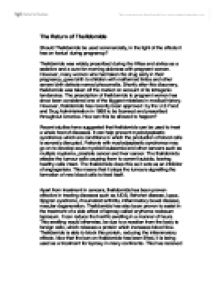 Should Thalidomide be used commercially, in the light of the effects it has on foetus' during pregnancy?

The Return of Thalidomide Should Thalidomide be used commercially, in the light of the effects it has on foetus' during pregnancy? Thalidomide was widely prescribed during the fifties and sixties as a sedative and a cure for morning sickness with pregnant women. However, many women who had taken the drug early in their pregnancy, gave birth to children with malformed limbs and other severe birth defects named phocomelia. Shortly after this discovery, thalidomide was taken off the market on account of its tetragenic tendencies. The prescription of thalidomide to pregnant women has since been considered one of the biggest mistakes in medical history. However, thalidomide has recently been approved by the U.S Food and Drug Administration in 1998 to be licensed and prescribed throughout America. How can this be allowed to happen? Recent studies have suggested that thalidomide can be used to treat a whole host of diseases. It can help prevent myelodysplastic syndromes which are conditions in which the production of blood cells is severely disrupted. ...read more.

This has recieved much critical acclaim and many people argue that the drug is just far too dangerous. In response to such a claim, one must consider the fact that thalidomide just has far too much potential in curing diseases, for it to be condemned for poor prescription of the drug. The new found uses of thalidomide were only discovered by chance, by an Israeli physician, Dr J Sheskin who administered the drug as a sedative, to six leprosy patients, after finding a bottle that had not been recalled. The next morning, the patients awoke to find that their swellings had gone down. The drug is now prescribed in pill form, under the name of Thalomid and is taken nightly in a single dose. Side effects of thalidomide may include sleepiness, drowsiness, constipation, skin rash, severe headaches, stomach aches, peripheral neuropathy (numbness and pain in your arms, hands, legs and feet) dizziness and nausea, giddiness or nervousness at higher doses, depression or mood-swings, a general sense of illness and of course, congenital limb malformation. ...read more.

Using drugs without knowing their mechanisms has been done for years, for example, Many ancient people brewed tea from willow bark in treatment for fevers: the beginnings of aspirin. Just as aspirin has been isolated and synthesised from the willow bark, analogs of thalidomide are being researched in order to produce a drug which has all the beneficial properties of thalidomide and others that may be encountered, without the harmful side effects. In conclusion, I believe that any other drug that had the same potential as thalidomide, without the dark history, would be hailed as a new wonder drug. Patients with multiple myeloma cancer alone number over 20,000 in Europe alone. Sufferers of diseases that thalidomide can treat would run into the hundreds of thousands. Thalidomide must not be overlooked. With research, I believe all the toxic and tetragenic effects of thalidomide could be eradicated. The company Celgene is already on its way to achieving this goal. As time passes, I believe thalidomide will shake its bad reputation and with added media coverage, could be praised for its miracle potential. ...read more.