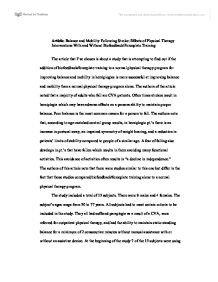 Article: Balance and Mobility Following Stroke: Effects of Physical Therapy Interventions With and Without Biofeedback/Forceplate Training The article that I've chosen is about a study that is attempting to find out if the addition of biofeedback/forceplate training to a normal physical therapy program for improving balance and mobility in hemiplegics is more successful at improving balance and mobility than a normal physical therapy program alone. The authors of the article noted that a majority of adults who fall are CVA patients. Often times strokes result in hemiplegia which may have adverse effects on a persons ability to maintain proper balance. Poor balance is the most common reason for a person to fall. The authors note that, according to age-matched control group results, in hemiplegic pt.'s there is an increase in postural sway, an impaired symmetry of weight bearing, and a reduction in patients' limits of stability compared to people of a similar age. A fear of falling also develops in pt.'s that have fallen which results in them avoiding many functional activities. This avoidance of activities often results in "a decline in independence." The authors of this article note that there were studies similar to this one but differ in the fact that those studies compared biofeedback/forceplate training alone to a normal physical therapy program. The study included a total of 13 subjects. ...read more.

The timed "up and go" test involves a patient who begins in a seated armchair then rises to stand with no assistance, walks a distance of 3m, turns around and walks back to the chair and sits unassisted. This test was used to measure mobility. If a patient performs this test in 10 seconds or less it means that they have no mobility issues and are independent in ADL's. A time of 30 seconds or longer indicates severe mobility issues and these patient's tend to be very dependent. The Berg Balance Scale measures a patient's ability to perform 14 different balance activities. The balance activities include sit and stand unsupported, sit to stand and stand to sit, chair to mat, stand unsupported with eyes closed, stand unsupported with feet together, reach with outstretched arm, squat and pick up an object from the floor, stand and turn to look over each shoulder, stand and turn 360 degrees toward the right and left, stand and alternately place one foot up on a step, maintain static standing, and stand on one LE. The subjects were not allowed to use any assistive device to perform this test. However they were allowed the use of an AFO if needed. The scores from this test range from 0 to 56. The higher the score means the better the balance. ...read more.

I believe that the administrators of the study's choice of using the Berg Balance Scale and timed "up and go" test as assessment tools were good. I have to admit though that this study was very limited. It was limited in the fact that they only had a total of 13 subjects that took part in the study and they only had patients with hemiparesis. I think that the study would have been more beneficial if it had a larger group of subjects and have treated patients with many different balance issues. In the discussion portion of this article they admit that due to the size of their sample group the findings of this study may not be significant and I agree. The findings of the study that proved that the addition of biofeedback/forceplate training to a normal physical therapy program for balance and mobility added no increased effect to the outcome of treatment wasn't surprising to me. The Balance Master used in this study was used as just another intervention in treating poor balance. I don't believe that this intervention provides better results than the other ones used in this study. I admit that the use of the Balance Master as an intervention was a very good idea and is an idea that can be taken out of this article and used in the clinic. The idea behind the study was a rational one and made a lot of sense. Overall I think the article was good and I would recommend it to others. ...read more.