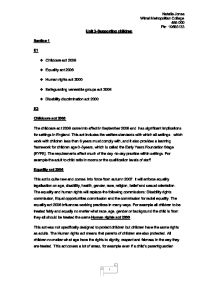 Unit 3-Supporting children Section 1 E1 * Childcare act 2006 * Equality act 2006 * Human rights act 2000 * Safeguarding venerable groups act 2006 * Disability discrimination act 2000 E2 Childcare act 2006 The childcare act 2006 came into affect in September 2008 and has significant implications for settings in England. This act includes the welfare standards with which all settings which work with children less than 8 years must comply with, and it also provides a learning framework for children age 0-5years, which is called the Early Years Foundation Stage (EYFS). The requirements affect much of the day-to-day practice within settings. For example the adult to child ratio in rooms or the qualification levels of staff. Equality act 2006 This act is quite new and comes into force from autumn 2007. It will enforce equality legalisation on age, disability, health, gender, race, religion, belief and sexual orientation. The equality and human rights will replace the following commissions: Disability rights commission, Equal opportunities commission and the commission for racial equality. The equality act 2006 influences working practices in many ways. For example all children to be treated fairly and equally no matter what race, age, gender or background the child is from they all should be treated the sameHuman rights act 2000 This act was not specifically designed to protect children but children have the same rights as adults. The Human rights act means that parents of children are also protected. All children no matter what age have the rights to dignity, respect and fairness in the way they are treated. This act covers a lot of areas, for example even if a child's parent/guardian consents for the child to have corporal punishment from the setting is not allowed because this is seen as degrading and a violation of the child's rights. Safeguarding venerable groups act 2006 This act came into force in autumn 2008. ...read more.

child would help the teacher throughout the day for example handing out the milk and fruit at play time, being at the front of the line when they line up for lunch etc, and choosing the book that the teacher will read to them all. By doing this is giving the child responsibility and choices. Throughout the day the teacher would praise the child and that would boost their self esteem. The teacher would change this person each day so everybody gets this responsibility and they can understand to take it in turns. By doing this is giving the children empowerment and feel confident even if it's just giving fruit out at play time is improving their self esteem and self efficacy. The child who is the teacher's helpers would get a lot of praise and encouragement of the teacher for doing it in an appropriate way and being polite and caring to their class mates. When the children get little jobs to do make them feel independent and like they have achieved something now they have the power to do things on their own, having the skills to be able to choose on their own, being polite will help speed up their development D2 The effectiveness of these methods in empowering the age range of children is giving them the ability to get the chance to have the independence and make their own choices they need, it's affected because they develop confidence and improves their self esteem. When encouraging children and praising all their work and giving them the support they need this will help them, again treating all the children equally and giving them the same attention will help with their self esteem. Also it's effective because the children know every morning that the teacher will pick a helper so they all want the responsibility so all the children are sitting nicely and with their arm crossed hoping they will get picked. ...read more.

In some children's centres they will introduce a persona doll to the children which is a doll but you can get all different types. For example a disabled doll, a different race doll, different gender etc. This is to show the children that no matter what age race, gender people are we should all be treated the same. They support children by teaching them about different disabilities as well as race etc. They are used in scenarios and everyday situations. They would have demonstrations, discussions, practical approach to learning. Different sessions could show different for example one session could be on body parts and another session could be on race. Making assumptions based on one set of stereotyped views this can also happen with children who have a disability so maybe they don't get the access to their full learning development, this is discriminating against them which isn't treating them equally and isn't giving them the same attention as other children. B1 In the children's centres it's important to always treat the children equally and involve every child all the time even when they have got a religion, race, disability and sexuality. In practise it's important to work around them and still involving them treating them like everybody else, for example a child with a religion who can't eat a certain food, then in practise the food menu should be changed so that the child can eat the food so everyone is having the same and everyone is equal, or if the child brings a certain food in no one else like it would be a good idea to do days where there are all different foods from different religions and the children can taste and get a feel for what types of foods are out there getting to know about the different religions and cultures in the world, still praising the child's religion and what she likes for example 'that looks very nice' making them feel confidence, and proud of their religion and types of food there is. ?? ?? ?? ?? Natalie Jones Wirral Metropolitan College 485.000 Pin: 10685133 ...read more.