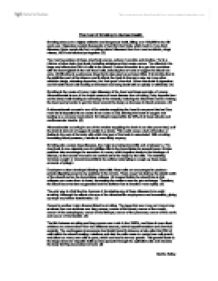 The Cost of Smoking to Human Health. Smoking tobacco is a highly addictive and dangerous habit, killing over 120,000 in the UK each year

The Cost of Smoking to Human Health. Smoking tobacco is a highly addictive and dangerous habit, killing over 120,000 in the UK each year. Cigarettes contain thousands of harmful chemicals, which lead to many fatal diseases. More people die from smoking related diseases than from road accidents, drugs misuse, AIDS and alcohol put together. (3) The most hazardous of these chemicals are tar, carbon monoxide and nicotine. Tar is a mixture of other toxic chemicals, including substances that cause cancer. Tar collects in the lungs and affects the DNA of cells in the alveoli. Carbon Monoxide is a gas that combines with the haemoglobin in the red blood cells, reducing the amount of oxygen the blood can carry. (2) Nicotine is a poisonous drug that is also used as an insect killer. It is nicotine that is the addictive part of the tobacco and it affects the brain in the same way as many other addictive drugs, releasing dopamine, the 'feel-good' chemical. ...read more.

The resulting 'smokers cough' or chronic bronchitis is the sufferer attempting to cough up these large amounts of phlegm. Emphysema often develops following bronchitis. Mast cells are encouraged to produce protein-digesting enzymes by particles in the smoke. These enzymes destroy the elastin walls of the alveoli and so the bronchioles collapse. Air trapped inside the alveoli due to this collapse can cause them to burst, decreasing the surface area for gas exchange. Therefore, the blood becomes less oxygenated and the sufferer has to breathe more rapidly. (2) The only way to minimise the chances of developing any of these diseases is to avoid smoking. Although the effects of some of the diseases like emphysema are irreversible, giving up stops any further deterioration. (1) Cancer is another major disease linked to smoking. The types that are more common among smokers than non-smokers are: lung cancer; cancer of the throat; cancer of the mouth; cancer of the oesophagus; cancer of the kidneys; cancer of the pancreas; cancer of the cervix and cancer of the bladder. ...read more.

As the mothers' smoking habits generally seemed to have little impact, it was concluded that the cancer was passed on through mutations in the fathers' sperm. (3) Unborn children are also affected by smoke. If the mother is a smoker, many problems can occur. Babies born to smokers weigh less than other children and often have a lower IQ. They are also more likely to suffer from hyperactivity and behavioural problems. Also, the children born to smokers are more vulnerable to diseases, especially those they are exposed to through passive smoking. (6) Smoking affects the body in numerous ways, generally for the worse, being the cause of many diseases. Smoking is also a social concern as it affects the body of not only the smoker, but also the people surrounding the burning tobacco, including unborn babies and young children who are unaware of the harm that cigarettes can cause. The cost of smoking to human health is high and can prove fatal in many cases, as I have explored and explained in this essay. ...read more.