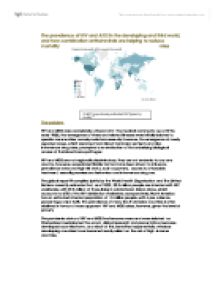 The prevalence of HIV and AIDS in the developing and third world, and how antiretrovirals are helping to reduce mortality rates

The prevalence of HIV and AIDS in the developing and third world, and how combination antiretrovirals are helping to reduce mortality rates The problem HIV and AIDS were completely unheard of in the medical community up until the early 1980s, the emergence of these and related illnesses were initially isolated to specific communities, namely male homosexuals, however, the emergence of newly reported cases, which stemmed from blood transfusion patients and also intravenous drug users, prompted a re-evaluation of the underlying biological causes of the blood borne pathogen. HIV and AIDS are not regionally discriminatory; they are not endemic to any one country, however, several identifiable factors have been shown to influence prevalence rates and high risk status, such as poverty, access to affordable treatment, sexually promiscuous behaviour and intravenous drug use. The global report[2] compiled jointly by the World Health Organisation and The United Nations currently estimates that, as of 2009, 33.3 million people are infected with HIV worldwide; with 22.5 million of those living in sub-Saharan Africa alone, which accounts for 67% of the HIV distribution worldwide; comparatively, North America has an estimated infected population of 1.5 million people, with a prevalence percentage of just 4.5%. ...read more.

The percentage of detectable HIV-1 RNA in the patient's plasma was compared between each of the three trial groups, the results of which can be seen in the graph below.[6] Similar efficacy has been established by other clinical trials since then, another randomised; double blind trial, which utilise 106 antiretroviral-naive patients, found that a combination of Zidovudine, Lamivudine and Lovride produced a prolonged reduction in HIV-1 RNA plasma and increase in CD4 cell counts in comparison with a double combination of Zidovudine and Lamivudine alone.[7] The efficacy of ART or HAART is not only cumulative to finding the correct combination of drugs, but also in following a consistent medication regime as drug resistance can become a problem, specifically, NNRTIs are predominant in generating resistant strains of HIV-1; the rapidity with which these mutations occur has a detrimental effect on future usage of NNRTIs, as resistance to one of the drugs can result in a resistance to all NNRTIs available for treatment. Implications The disparity between low-income and high-income countries' access to antiretroviral treatment is one of the most prominent burdens affecting the developing world and the instability of the global economy has cast uncertainty on the sustainability of ART. ...read more.

by donations from member states and so there is unlikely to bias as no one country provides sole funding for the organisation. The WHO employs specialists in an array of professions, who work to combat infectious disease and promote healthcare initiatives; they also present reports of collated data on health from around the world. I made reference to several pieces of data obtained from both the WHO website, from their published health reports and fact sheets. These documents are written by multiple people and numerical values that have been cited have been calculated using data collected over periods of years. The WHO is often cited by medical research articles, which suggests that the data is regarded as highly valid and reliable by the scientific community. The New England Journal of Medicine is a prominent, peer-reviewed, medical journal, which was established in 1812. In order for an article, or piece of research, to be published in the journal it must be reviewed by independent academics within the same field, if they are in agreement that the information given is scientifically correct at the time then it will be accepted into the journal; the journal publish about 1 in 20 entries, which is suggestive of the stringent criteria that must be met. ...read more.