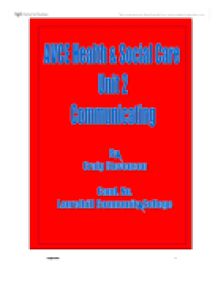 The theory of communication.

Communication For assignment 2 I am expected to study the theory of communication. I am expected to look at confidentiality, code of conduct for staff and the data protection act of 1998. Abraham Maslow stated that "you begin to feel the need for friends, a sweetheart, children, affectionate relationship in general, even a sense of community" "looked at negatively you become increasingly susceptible to loneliness and social anxieties" what he means by this is, without communicating to anyone for even a short period of time can have dramatic effects and make you feel "increasingly susceptible to loneliness". In Maslow's hierarchy of needs communication comes third because in the third hierarchy of needs Maslow talks about the need for friends and a sense of community and without it you become "susceptible to loneliness. The government came up with a new strategy for learning disabilities for the 21st Century, it was published on 20th March 2001 and was called "the white paper" "valuing people". The proposals are based on 4 key principles: * Civil rights * Independence * Choice * Inclusion It has cross government backing and its proposals are intended to result in improvements in: * Education * Social services * Health * Employment * Housing and support for people with learning disabilities and their families and carers. A number of additional publications accompany "the white paper". These are: An accessible version of white paper; "Nothing about us without us", a report from the learning disability service users advisory group; "Family matters counting families in", a report on the particular needs of family carers. Theory of personality development Rogers therapy was on extension of his theory of personality development and was known as "client-centred therapy", since the basis of the therapy was designed around the client. According to Rogers "each person has within themselves the inherent tendency to continue to grow and develop. As a result of this the individuals self-esteem and self-actualisation is continually influenced this development can only bed achieved through what Rogers refers to as "un-conditional positive regard". ...read more.

goodbye "goodbye, I'll look forward to seeing you again next week" Throughout the session I treated the client no differently due to her sexuality or culture. There were some barriers to communication. One major barrier was I don't want to ask her questions she doesn't want to answer e.g. questions about her background. Another barrier was her being nervous about her first therapy session, she sat back in her chair with her arms folded, suggesting she was being protective of herself, as the session progressed she gradually opened up more to me and became more comfortable. The client was not concerned about confidentiality as I reminded her "anything said within these walls stays within these walls" The interviewee told me after the role play that she felt comfortable but was aware of my eye contact, she said I made her feel equal to me and said I made her feel welcome and she left feeling welcome and comfortable she also stated "if it was a real therapy situation then the goodbye statement would make her come back next week. I am very pleased with the counselling session it has made me more aware of "body language"; it has also highlighted some of my better points. From the feedback from the observer and the interviewee I have the knowledge to improve my technique. I really enjoyed the therapist experience and I hope I won't forget it in a hurry. If I was to redo the "therapy situation role play" I would have made more physical contact with the client, a welcoming handshake when the session was coming to an end I would ask the client hw she thought the session went, I would get her feedback. This was only a practise and it was the first time I had ever done anything like this and I think this was quite apparent. I believe that practise makes perfect and I have had little practise with more practise I could defiantly improve my technique. Craig Stevenson 1 ...read more.