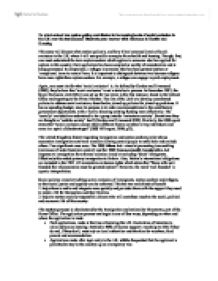 To what extend has ayslum policy contributed to increasing levels of social exclusion in the UK over the last decade?

To what extend has ayslum policy contributed to increasing levels of social exclusion in the UK over the last decade? Illustrate your answer with reference to Health and Housing This essay will discuss what asylum policy is, and how it has increased levels of social exclusion in the UK, where I will use specific examples from health and housing. Though, first, one must understand the term asylum seekers which applies to someone who has applied for asylum in this country, their application has been accepted as worthy of consideration and is being processed. In comparison, a refugee is someone who has been granted asylum or 'exceptional leave to remain' here. It is important to distinguish between two because refugees have more rights than asylum seekers. For example, a refugee can engage in paid employment. Again, one must clarify what 'social exclusion' is. As defined by Gordon and Townsend (2000), they believe that 'social exclusion' is not a state but a process. In December 1997, the Social Exclusion Unit (SEU) was set up for two years in the first instance, based in the Cabinet Office and reporting to the Prime Minister. The aim of the Unit is to develop coordinated policies to address social exclusion, described as joined-up policies for joined-up problems. It has no spending budget, since its purpose is to make recommendations to the contributory government departments, with a view to directing existing funding more effectively. The 'socially' excluded are understood to be a group outside 'mainsteam society'. Sometimes they are thought as 'outdide society' itself. ...read more.

failing to co-operate with re-documentation Earlier this week, Micheal Howard of the Conservatives put forward the ways to tackle the issue of dealing with AS. For example, Howard would like the UK to withdraw from the UN Refugee Convention to allow the government to adopt tougher measures against asylum seekers. To create quotas, where Parliament would vote each year on how many asylum seekers, economic migrants, and spouses and dependents should be allowed into the country. Also, to adopt a points system to identify migrants whose skills are most needed and promises round-the-clock security at ports (Daily Mail, January 24th 2005). This is also in conjunction with the 2002 Nationality, Immigration and Asylum Act states the 'Secure Borders, Safe Haven' (title of white paper from which it arose), seen as tough but fair. The Act also mentions that 'accommodation' or reception centres rather than the dispersal system. Criticised re: institutionalisation and inhibits integration + difficulties re: where to locate. Continuation of Dispersal: more emphasis on dispersing people to areas that best meet their language and other needs and on helping people to integrate. Furthermore, a report last August revealed Britain to be the world's asylum capital, attracting more claimants and allowing more to stay than any other country. (Daily Mail, January 24th 2005). In comparison, the www.bbc.co.uk/asylum_day states that only 2% of the worlds asylum seekers come to the UK. Health: immigrant groups of various kinds have a variety of specific health needs. For example, different groups are particularly prone to different kinds of disease and so have specific monitoring, testing and health education needs. ...read more.

They may show anxiety, nightmares, withdrawal, or hyperactivity but few need psychiatric treatment. Support for children needs to be multifaceted, aiming to provide as normal a life as possible, imparting a sense of security, promoting education and self-esteem. It is also important to support parents, as they may be facing difficulties themselves. The most therapeutic event for a refugee child can be to become part of the local school community, to learn, and to make friends, though there is always a possibility of bullying. For a health worker, contact with the school can be very helpful. Some areas have employed refugee support teachers who provide help to refugee children in school and may be alert to any problems. Unaccompanied minors are especially isolated and vulnerable. Ongoing contact with social services is important to ensure that they have a needs assessment and care plan, and this should be regularly monitored. In conclusion, the basic health and housing needs of asylum seekers and refugees are broadly similar to those of the host population, although previous poor access to health care may mean that many conditions have been untreated. Symptoms of psychological distress are common but do not necessarily signify mental illness. Many refugees experience difficulties in expressing health needs and in accessing health care. Poverty and social exclusion have a negative impact on health. Initially refugees will need help to make contact with health and social support agencies. Professional interpreters are essential. Time, patience, and a welcoming approach will break down many barriers, but some refugees have problems that need specialist help and support for which there are few resources, especially outside London. It is crucial that these resources are developed before larger numbers of asylum seekers are dispersed. Word Count: 2,700 ...read more.