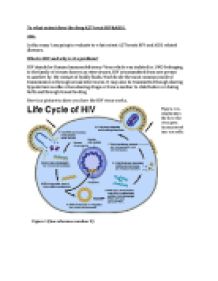 To what extent does the drug AZT treat HIV&amp;AIDS?

﻿To what extent does the drug AZT treat HIV&AIDS. Aim. In this essay I am going to evaluate to what extent AZT treats HIV and AIDS related illnesses. What is HIV and why is it a problem? HIV stands for Human Immunodeficiency Virus which was isolated in 1983 belonging, to the family of viruses known as retroviruses. HIV is transmitted from one person to another by, the contact of bodily fluids. Worldwide the most common mode of transmission is through sexual intercourse. It may also be transmitted though sharing hypodermic needles when sharing drugs or from a mother to child before or during birth and through breast feeding Here is a picture to show you how the HIV virus works. Figure 1 re-emphasizes the how the virus gets incorporated into out cells. Figure 1 (See reference number 3) What is AIDS? AIDS is the name given to the collection of all illnesses which someone can get if their immune system has been severely damaged by HIV. AIDS standing for Acquired Immunodeficiency Syndrome. When getting infected with HIV, your body will try to fight the infection secreting, ?antibodies,? which help fight of HIV. When getting infected with the HIV virus, many people will have an illness following this infection during the first few weeks or months. ...read more.

The number in brackets represents the number of people in the cohort study. To what extent did AZT treat HIV ? These results showed to an extent; taking high dosages of AZT with other combined drugs increased the CD-4 count and this in turn slowed down the replication of HIV & AIDS. Evaluation of the Study. Overall, this is not a good study as the sample size is not large enough giving a good representation of the population. Although they repeated the treatment after 24 weeks they should have made the period of evaluation a lot less short, to monitor the patients. In addition other external factors were not taken into account, which could have been reflected in the results they observed, e.g. diets. They did not mention if they included patients from different ethnic backgrounds, and did not have a placebo trial to see if any psychological effect had an effect on CD-4 count. By not having patients from different ethnic backgrounds and having a large sample size, the validity of the experiment was defeated. It did not give a true insight to whether it worked for different types of people as some ethnic backgrounds are more susceptible to HIV& AIDS. Implications of HIV. One social implications of HIV is, an increased risk of acquiring the infection. ...read more.

In the Western view, acupuncture likely works by stimulating the central nervous system (the brain and spinal cord) to release chemicals called neurotransmitters and hormones. These chemicals dull pain, boost the immune system and regulate various body functions.? Another Alternative treatment is Nutritional Therapy for AIDS. In nutritional therapy, certain diets and nutritional supplements are used to strengthen a frail immune system. Supplements can also make up for the frequent nutrient deficiencies found in people with HIV infection and AIDS, which are often caused by chronic diarrhea and the body's reduced ability to absorb nutrients, or an eating disorder. They say with the right nutritional therapy, HIV can be prolonged and can boost your immune system, which increase CD-4 count. Naturopathic physicians, in particular, recommend a diet with plenty of fresh and organic vegetables, beans, and whole grains, and low in sugar, animal fats, alcohol, and caffeine. Nutritional supplements, many with antioxidant properties, that can be helpful to people with HIV infection and AIDS include: 1. vitamin A (beta-carotene) 2. vitamin C 3. vitamin B6 These alternatives have an approach to treating HIV but some may argue that it doesn?t give an immediate result in weeks like how AZT does. As AZT drastically increases the Cd-4 count reflecting a progression in combatting HIV. ...read more.