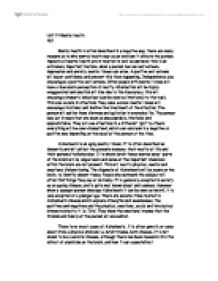 Unit 14 Mental health A01 Mental health is often described in a negative way; there are many reasons as to why mental health may occur and how it affects the person. Aspects of mental health are in relation to self acceptance-this is an extremely important feature, when a person has low self esteem, depression and anxiety, mental illness can arise. A positive self esteem will boost confidence and prevent this from happening. Independence also encourages a positive self esteem. Often people with mental illness will have a inaccurate perception of reality-information will be highly exaggerated and emotion will rise due to the inaccuracy, this will encourage dramatic behaviour (can be seen as irrational) to the topic. This also occurs in situations they come across; mental illness will encourage irrational and ineffective treatment of the situation. The person will suffer from distress and agitation in everyday life. The person may act in ways that are seen as unacceptable, irrational and unpredictable. They will see situations in a different light to others; everything will be over-dramatised, which can conclude in a negative or positive way depending on the mood of the person at the time. Alzheimer's is an aging mental illness. It is often described as dementia and will affect the person's memory, their reality of life and their personality/behaviour. It is where brain tissue wastes away- parts of the brain will no longer work and some of the important chemicals within the brain are not present. This will lead to physical, mental and emotional disfunctioning. The diagnosis of Alzheimer's will be scans on the brain, to identify absent tissue. People who surround the subject will often find things they say or do funny. It is generally accepted in society as an ageing disease, and is quite well known about and common. However when a younger person develops Alzheimer's it can be seen as 'weird', it is less accepted at a younger age. ...read more.

Some autistic people can lead relatively normal lives whereas some will need a lifetime of constant care. It is quite often not accepted by the community because they do not 'look' disabled. The 'Triad of impairments' (symptoms) of autism are; * Social communication o Social communication is a very foreign experience for autistic people, body language seems ineffective and worthless, they often take things literally; therefore do not understand humour, sarcasm, common phrases and sayings. They may have difficulties with realising what people mean by using facial expressions and tone of voice. o Autistic people will often find other ways of communication, with their hands or pictures/symbols. They often understand what other people say to them, but have very limited vocabulary themselves. o On the other hand some can speak well themselves but cannot participate in normal/general conversations. They may either talk for length about themselves and their own interests or will repeat the phrase of the other person. * Social interaction o One of the key difficulties with autism is that they generally cannot comprehend emotional worries/thoughts of others around them and find it challenging to express their own-this will often make understanding how they are feeling very difficult for the carer/parent. * Obvious skills in communication that we all pick up naturally during socialisation are generally not apparent in an autistic person. Their behaviour may seem odd or rude to others, such as starting an inappropriate conversation or interrupting other people. * They will often prefer their own company, so are often seen as 'loners'. * They may seem insensitive because they cannot grasp emotional thoughts of others, and similarly not being able to seek comfort from others themselves. o They often want to make friends but due to the inability to understand obvious communication skills, it becomes extremely difficult for others to understand them. * Social imagination o Social imagination allows us to predict certain behaviour, to understand abstract ideas and to imagine other circumstances outside our normal routine. ...read more.

Suicidal attempts are common in anorexics, bodily abuse is the key aspect, and they will exercise to the extreme will fasting themselves. Bulimia Like anorexia, bulimia derives from the burning desire to be thin. Bulimics will often go through stages from binge eating to obsessive purposeful purging after meals via laxatives and diuretics OR excessive fasting and constant exercise. This can cause extreme affects on the health of that person. For example bulimia can lead to an irregular heart rate, kidney damage etc. Due to the inadequate nutrition the person is receiving other health issues can occur such as low blood pressure, slowed heart rate and a fall in body temperature. The mortality rate for anorexics is thought to be the highest out of any other psychiatric disorder. Less than half the amount of anorexics fully recovers and 20% remain chronically ill. The main aim for treatment in anorexia is to encourage weight gain. For extreme anorexia this will include hospitalisation and possibly involuntary hospitalisation under the mental health legislation. However the majority will be treated as outpatients so will be in and out of health services visiting many different health practitioners for different aspects of the illness i.e. psychiatrists. Family therapy deems very affective in adolescents. However adult anorexia is harder to accomplish by reasoning and advising. So drugs are often used. However recent studies show that many drugs are not very effective. On the other hand there has been research to suggest that a 14mg tablet per day of Zinc can help with daily routine to regain weight. This works by increasing the effectiveness of neurotransmitter in parts of the brain that control hunger. Finally there are many support groups and volunteers willing to help beat anorexia. http://www.bbc.co.uk/health/conditions/mental_health/disorders_eating.shtml http://en.wikipedia.org/wiki/Anorexia_nervosa#Physical http://www.helpguide.org/mental/anorexia_signs_symptoms_causes_treatment.htm#causes There are many different types of mental illness, some are more socially accepted than others and some are harder to recognise than others. All mental illnesses will affect the body and mind in different ways however they will all dramatically affect the person's physical, social, intellectual and emotional needs. ...read more.