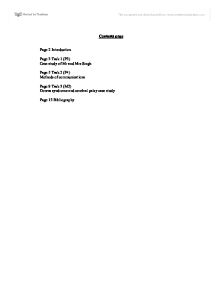 Contents page Page 2 Introduction Page 3 Task 1 (P3) Case study of Mr and Mrs Singh Page 5 Task 2 (P4) Methods of communications Page 9 Task 3 (M2) Downs syndrome and cerebral palsy case study Page 13 Bibliography The following assignment is about communication. There are 3 parts to the assignment. The first part (P3) is a recognized case of Mr and Mrs Singh. The second part (P4) is the various forms of communications used with an explanation of what they are and who might use them. The third (M2) and final part is two further case studies which gives details of particular conditions, the problems somebody might face with such a condition and what you could do to help them. -- Task 1 (Pass3) Describe factors, which may influence communication and interpersonal interactions with particular reference to heath and social care settings. Case study of Mr & Mrs Singh I observed a multi disciplinary team meeting that was held to make a discharge package for Mr and Mrs Singh. Mrs Singh had just had major bowel surgery and was now ready to leave hospital but before she could a care package needed to be put in place. The meeting consisted of Mrs Singh, her husband, the ward nurse, a district nurse, a social worker, a doctor, a physiotherapist, a dietician and an occupational therapist. The meeting took place in a day room at a busy lunchtime period that also had bad lighting and was noisy. These conditions were not at all conducive to a successful meeting. All the medical and professionals in attendance were sat on high chairs whereas Mr and Mrs Singh were sat on low patient chairs. There were seven health professionals present and Mr and Mrs Singh. This will have made Mr and Mrs Singh feel very uneasy right from the start. The seating arrangements during this meeting gave the health professionals immediate authority and empowerment just by being sat higher up than Mr and Mrs Singh. ...read more.

It was developed about 10 years ago and was designed to be used with a computer. The type speak is used just like typing a letter only with the use of a computer and voice synthesizer it speaks what you have typed. The touch speak works in a similar way only it uses a screen that has an abundance of images and wide range of vocabulary that you touch and the computer speaks using a voice synthesizer. You can also pre type sentences into it. These help people to communicate who have a particular disability such as motor-neurons disease or people who have had throat cancer and no longer have a voice box because of it. Makaton Makaton is a form of signing. It uses both images and hand signing to convey a message. It was developed about 20 years ago and the symbols are as pictographic as possible. It is similar to what a person would do if they were in a foreign country and did not speak the spoken language. Makaton was developed from the British sign language and supports the written word in the way sign supports speech. It is commonly used with children but whoever is in the child's life will also use it. Below is a couple of example of Makaton signs that are used. There is also a children's television programme on the BBC called something special which is a programme that uses Makaton. The programme was developed with children in mind who are deaf so that they too can enjoy children's television. -- Signing Sign language is a manual communication. It combines hand, arm, body and facial movement to express thoughts. It is not only used by the deaf but by people with a speech Impediment. It has variations for geographical locations and is used in over 40 countries. The first school for the deaf opened in Paris in 1755. ...read more.

They have a flat nose bridge and the back of their head is flat. They also tend to be shorter and have only 1 crease on their palm instead of 2. A downs sufferer has a high risk of being born with a heart defect and is at higher risk than normal of developing leukemia and testicular cancer. -- They are also prone to gastric problems and recurrent ear infections. Another common problems downs sufferers have is obstructive sleep apnea and thyroid problems. The average age of a downs sufferer is 60 and most lead a relatively normal life with support however this is not always the case and some need 24 hr care. There is no cure for downs syndrome but heart conditions and recurrent ear infections etc can be treated. A downs sufferer might benefit from a speech therapist because of their short jaw line, which makes them look like they have a long tongue. A speech therapist can also help with eating and drinking, as this is another common problem because of the tongue/jaw ratio. Because they have poor muscle tone they could also benefit from physiotherapy. Downs sufferers benefit from the use of advocates and technology such as the touch speak that uses a portable or hand held computer with built in voice synthesizer can communicate words, phrases or sentences at the touch of a screen or an hearing. Hearing aids and cochlear implants are also used to assist with deafness. A cochlear implant is a device that has small electrodes implanted under the skin and a transmitter that is worn behind the ear similar to an hearing aid. The implant is designed to stimulate the auditory nerve (what gives us hearing) and can help people who are profoundly deaf or totally deaf. It can not make hearing completely normal but it can give a sensation of sound that does improve with time. It benefits those best that were born with hearing but lost it through an accident or illness. ...read more.