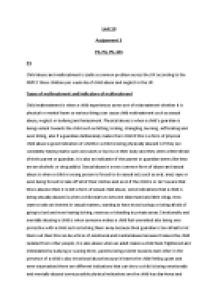 ﻿Unit 10 Assignment 3 P3, P4, P5, M3 P3 Child abuse and maltreatment is sadly a common problem across the UK according to the NSPCC three children per week die of child abuse and neglect in the UK. Types of maltreatment and indicators of maltreatment Child maltreatment is when a child experiences some sort of mistreatment whether it is physical or mental harm so various things can cause child maltreatment such as sexual abuse, neglect or bullying and harassment. Physical abuse is when a child?s guardian is being violent towards the child such as hitting, kicking, strangling, burning, suffocating and even biting, also if a guardian deliberately makes their child ill this is a form of physical child abuse a good indication of whether a child is being physically abused is if they are constantly having marks such as bruises or burns on their body and they seem a little afraid of their parent or guardian, it is also an indication if the parent or guardian seems like they are an alcoholic or drug addict. Sexual abuse is a very common form of abuse and sexual abuse is when a child or young person is forced to do sexual acts such as oral, anal, ...read more.

whether there is any concerns that the child is being abused and if there is then the ChildProtection Enquiry begins and because of the confidentiality the person that has reported the case is not informed about the enquiry. Before making referrals the parents or carers should be informed of your intentions of referring them to the Local Authority Children?s Social Care Team. P5 When working with children or young people that have been abused their age and maturity should be taken into account when speaking to them, their rights should be respected and they should not be pressured into speaking. The child should be taken seriously and their concerns and fears should also be taken into account and not be brushed away because of the age, the child may be telling the truth and their views are important so they should be taken into account for the child?s best interest. A child should also be spoken to without their parents or an adult they know being present because this could make the child be less open about speaking about events that have taken place and the child may also be scared to speak about the events in front of their parents or adults that might ...read more.

still be telling the truth like the case of Jimmy Savile where young girls were being abused by him but some of the young girls that complained were not believed because of how famous and respected Jimmy Savile was and the lack of evidence the girls had. However in some cases a child or young person maybe making it up for attention or they could be saying something that sounds bad but really isn?t explained properly and if professionals believe everything the child or young person says then it could lead to misunderstandings. Another strategy is teaching the child or young person how to protect themselves and that they have a right to their own privacy, this is effective because the child or young person will learn between what is right and wrong and what to do in situations where they are in danger of being abused, however one negative effect is how long it will take for the child or young people to actually take in and understand what the professionals are trying to teach them and they may find it hard to understand how to keep their own privacy and how to protect themselves so it may take longer for them to learn. ...read more.