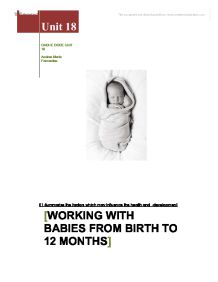 Unit 18. Summarise the factors which may influence the health and -development of babies in the first year of their lives. Describe how indoor and outdoor environments can be made safe, reassuring and stimulating

Unit 18 CACHE DCCE UNIT 18 Andrea Maria Fernandes [WORKING WITH BABIES FROM BIRTH TO 12 MONTHS] E1-Summarise the factors which may influence the health and -development of babies in the first year of their lives Environmental factors such as not having enough space in the garden for the baby to play and explore will influence their development as they may not be able to expand their gross and fine motor skills. "Generally, people with a high level of earnings enjoy a better lifestyle, with better housing, better food, warm clothes and own transport." Meggit. C (2001:9) Parents may not have enough money to fund for toys and equipment for the baby, which means they will not experience different experiences. Another factor is genetics which may influence the health and development of the baby. This is because some illnesses are inherited through genes. For example Down's syndrome, this has been resulted from a chromosomal abnormality. The baby can have problems such as heart defects and chest infections. Illnesses such as meningitis can cause epilepsy and hearing problems, whilst asthma is long term and the baby may need to have asthma pumps. The baby may have a poor appetite, constipation and may be feeling miserable, when they are ill. Their weight and height may be below average, if they have not been developing correctly due to illness. Antenatal factors also influence the development of the baby, as during the pregnancy the mother may have taken illegal drugs or alcohol. This can cause the baby to develop an addiction; due to this they will have to be weaned off of it. Infections can also pass through the umbilical cord such as rubella, which can leave the baby deaf or blind when born. When the baby is being delivered, there may be complications which can affect the baby's health such as lack of oxygen. This can be caused by the umbilical cord becoming entangled. ...read more.

The practitioner must also keep accurate records whilst there is a high level of supervision. They must also provide a safe stimulating environment by selecting suitable resources. E6 - Show how the child protection policies and procedures in the setting protect and safeguard the babies. There are many policies and procedures that protect and safeguard babies. For example observations, this protects the baby's as the practitioner will be able to see any changes in the babies and can compare to others. They will also be able to identify concerns about the baby's health and development. Recognising the signs of abuse in a baby are also an important procedure, this is due to the baby not being able to talk and to tell the practitioner what is wrong. Moreover so they can then go to the designated safeguarding officer immediately to prevent the abuse or stop it, if it is happening. The Every Child Matters initiative which is part of the Children Act 2004, states that all children should stay safe. Record keeping is imperative, as you can also see the changes in the baby's development. The parents' name, address and phone number should be documented, in case of an emergency. The Data Protection Act 1998 ensures that confidentiality occurs by only making the information accessible for those who have the right, for instance the parents or practitioner. Making sure there is a safe recruitment of staff is also crucial as if this does not occur, there may be a problem. "Providers should make decisions of suitability using evidence from: CRB disclosure, references, full employment history, qualifications, interviews and identity checks." DfEs (2008:29). There must be the correct staff to baby ratio which is 1:3 because, this will make the environment safe as there are a number of staff to look out for accidents. It is important to report concerns to the correct person, for instance the designated safeguarding officer. They have responsibilities such as providing information and advice to the person involved about safeguarding. ...read more.

Another good reason why there should be two key workers or a key worker and a co - worker is that they have shifts. The key worker is effective, because they empower the baby, as they have made a bond with them, which makes the child confident. Mary Ainsworth's theory expanded on Bowlby's theory by describing three types of attachment which were secure, resistant and avoidant. These types of attachments were found when Ainsworth did a study called the Strange Situation. In the study, researchers observed children between the ages of 12 and 18 months as they responded to a situation in which they were briefly left alone and then reunited with their mothers. She found out that the child, who had a secure attachment, would be very distressed when the mother leaves. Whereas with a resistant attachment they would show intense distress and avoidant attachment they would show no signs of distress. Ainsworth's theory has influenced practice today, as key workers encourage the parents to settle the child in the setting as soon as possible and how ever long they need to do so. Piaget 1896-1980 identified the different stages of development. He said that children moved through the sensory motor stage (0-2 years), pre operational stage (2-7 years) Piaget used the expression 'schema' to mean a child's thoughts. He felt that the child's schemas would change as new pieces of information came forward. During the sensory motor stage he said "The child develops physical schemas as he/she gains control of his/her movements." Tassoni. P (2007:67) Throughout the pre-operational stage the "Children begin to use symbols to stand for things, for example a piece of dough represents a cake." Tassoni. P (2007:67) "Bruner also observes that the process of constructing knowledge of the world is not done in isolation but rather within a social context." Meggit. C (2006:156) He argued that children should need things such as books and interest tables. He is known for 'scaffolding' which is when adults help the children's development in a way that best suits the child. ...read more.

This coursework piece covers all sections of Unit 16. All E grade criteria have been met alongside D, C and B. There is understanding throughout these sections of the requirements of the examining board. There are links to theory and practice where required so as to show knowledge and understanding. However, in places, particularly in the B grade task, better examples linked specifically to babies under 1 year could be used.

Please note that I have been unable to write comments on the references used, as in PDF format these are not legible.