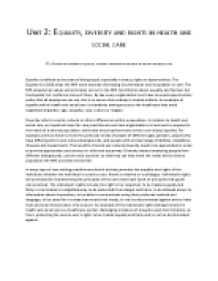 ﻿Unit 2: Equality, diversity and rights in health and social care P1: Explain the concepts of equality, diversity and rights in relation to health and social care Equality is defined as the state of being equal, especially in status, rights or opportunities. The Equality Act 2010 helps the NHS work towards eliminating discrimination and inequalities in care. The NHS already has values and principles set out in the NHS Constitution about equality and fairness but the Equality Act reinforces many of them. By law every organisation must have an equal opportunities policy that all employees can see, this is to ensure that nobody is treated unfairly. An example of equality within health and social care is everybody having access to the healthcare they need regardless of gender, age, sexuality, race, culture or religion. Diversity refers to social, cultural or ethnic differences within a population. In relation to health and social care, an important issue for care practitioners and care organisations is how best to respond to the needs of a diverse population, while also ensuring that every service user enjoys equality. For example; services have to meet the particular needs of people of different ages, genders, people who have differing ethnic and cultural backgrounds, and people with a broad range of abilities, disabilities, illnesses and impairments. ...read more.

Violet feels devalued because nobody thinks what she has to say is important or worth the effort to try and understand. In the video ?Into the eye of the Storm? the inferior group, based on eye colour, experiences discrimination from the superior group. The inferior group gradually become more subdued and quiet, more accepting of things that disadvantage them and they accept inequality. This happens in such a short period of time and they go from happy, pleasant children to quiet children with no voices. When they are told they took longer to do an activity than when they previously did the same activity they say it?s because of their eye colour. They took longer because they believed they were less intelligent because of their eye colour, because of what they were being told by the dominant group. So the discrimination they experienced affected them academically, made them feel like they couldn?t achieve, made them believe they were less intelligent, lowering their self-esteem and self-confidence. M1: aSSESS THE EFFECTS OF THOSE USING THE SERVICE OF THREE DIFFERENT DISCRIMINATORY PRACTICES IN HEALTH AND SOCIAL CARE SETTINGS Marginalisation is an effect of discriminatory practice. In ?Waiting on a Telegram? Violet feels marginalised. This means she feels as though she has been put to one side, ignored, unimportant and isolated. ...read more.

The biggest effect to me was how quickly the discriminated against group accepted that they were less intelligent, less clean, worth less than the superior group, less important, less likely to achieve...etc. They didn?t once say this is unfair, they just accepted it all. This shows me that if people experience any kind of ongoing discrimination from a young age they are less likely to say anything about it, making it more important that those who witness discrimination need to make a stand, to be a voice for those whose self-esteem and self-worth has been so depleted by previous discrimination that they accept that they are less entitled to an education, to healthcare, to their human right not to be discriminated against. In conclusion, I firmly believe that there is no place for discrimination in a health and social care setting, no matter who, where or in what form it comes from. If it is our human right not to be discriminated against on any level for any reason, the places where we can expect this not to happen is health and social care settings; whether that be in the doctors, hospitals, dentists, schools, nurseries?etc. The effects of discrimination can be detrimental to our mental health and in turn our physical health and this should never be overlooked or accepted. ...read more.