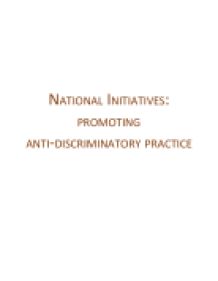 ﻿National Initiatives: promoting anti-discriminatory practice Nursing and Midwifery Council (NMC) The NMC is a regulatory body for nurses and midwives, in order for them to be able to practise in the UK they must be registered with the NMC. This also requires them to meet standards and follow the code of conduct. The NMC promotes anti-discriminatory practice because if any nurse or midwife falls short of the code of conduct they are investigated by the council. The code of conduct was revised and improved recently to make it easier to understand and follow, making it more effective. The standards have pretty much stayed the same, however they have been summarised into four statements; prioritise people, practise effectively, preserve safety and promote professionalism and trust. Prioritise people means putting the care and safety of the patient first, they should be your main concern. This covers treating people with kindness, respect and compassion, delivering the basics of care effectively, avoiding making assumptions and recognising diversity and individual choice. Ensuring any treatment or assistance of care is delivered without delay and people?s human rights are upheld. This statement of the code of conduct and its standards promotes anti-discriminatory practice because upholding people?s human rights means challenging discriminatory practice when you see it, showing people kindness, respect and compassion and delivering high quality care doesn?t just apply to certain service users, it applies to all regardless of social class, age, gender, sexual orientation, religion, culture, race, gender reassignment?etc. Practise effectively means being able to communicate with patients effectively, trying to break down language barriers where it is possible, using language and terms that your patients can understand and making sure they are understanding you. ...read more.

It emphasises the importance of taking racial bullying, harassment and discrimination seriously. Before the Equality Act brought all discrimination legislation under one law the Race Relations Act along with other legislation were brought into policies separately. For example; West Hertfordshire Hospitals NHS Trust?s Equal Opportunities Policy references all discrimination related policies and states that in relation to the Race Relation Act the Trust will aim to eliminate unlawful racial discrimination whilst promoting good race relations between people of different racial groups. It states how employees of the Trust will support this legislation and meet its requirements by putting a responsibility on them to not harass, abuse, intimidate or discriminate against service users or colleagues on the basis of race or any other basis. That employees must report any incidences of discrimination immediately and that any reports will be dealt with by the Trust very seriously. This Act promotes anti-discriminatory practice by making it hospital policy to challenge any discriminatory practice and by making sure all employees understand the seriousness of discrimination. Without this legislation, service users who are treated differently because of their race, who don?t have equal access to healthcare wouldn?t have the legal protection this Act affords them, and incidents of this type of discrimination could go on unnoticed or undealt with or reported incidents wouldn?t have serious enough consequences that would deter or contribute towards eliminating racial discrimination. http://www.cambriantraining.com/uploads/HTMLemail/Newyddion/October%202010/equalityact2010.jpg Care Standards Act 2000 The Care Standards Act encourages anti-discriminatory practice by setting requirements for service providers to take account of religious, racial, cultural and linguistic needs of service users. This Act established a regulatory body called National Care Standards Commission that regulates care services, this Act also made provisions so that a list of people deemed not suitable to work with vulnerable adults could be kept to prevent them from working in settings such as hospitals, care homes, nurseries?etc. ...read more.

Training is provided for all employees on diversity, equality and individual rights and this is how ant-discriminatory practice is promoted in a hospital setting. Challenging discriminatory practice is a mandatory responsibility as a health and social care professional, there are disciplinary actions if you allow discriminatory practice to happen without challenging it or reporting it. Making it mandatory to report or challenge discrimination makes colleagues less likely to stick up for each other because there are disciplinary actions for allowing it to happen. Recognising and Respecting Patients Beliefs, Values and Culture An example of how hospitals promote anti-discriminatory practice is by educating their employees on recognising religious beliefs, culture and values. For instance, Greater Manchester West Mental Health NHS Foundation Trust have a multi-faith handbook that can be found on their website that is available to both service users and employees. It is a handbook that gives a compact explanation of each religion and the requirements of that religion such as prayer times and how arrangements must be made in order for service users to continue to practice their religions, this also includes dietary and food preparation requirements. Dietary and food preparation requirements are not just specific to religious requirements, the values and beliefs of a vegan or vegetarian are equally as important as a Jewish person?s requirement for Kosher food or a Muslim?s requirement for Halal food, also people who eat gluten-free because they have an allergy to gluten. Actively supporting the religious beliefs and values of service users promotes anti-discriminatory practice because it means acknowledging and respecting that person?s religion rather than ignoring how important it is to them and not supporting them in their practise of it. ...read more.