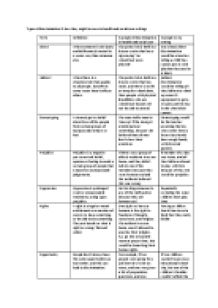 Unit 2 task 1 -Types of discrimination &amp; how they might be seen in health and social care settings

﻿Types of discrimination & how they might be seen in health and social care settings Term Definition Example of discrimination in health and social care Example in my setting Direct When someone is obviously and deliberately treated in a worse way than someone else. If a sports club is held in a leisure centre that has a sign saying "no wheelchair users allowed". In a school, direct discrimination would be a teacher telling a child they cannot join in with playtime because he is black. Indirect When there is a situation/rule that applies to all people, but affects some worse than it affects others. If a sports club is held in a leisure centre that has stairs, and there is no lift or ramp for wheelchairs, then people with physical disabilities who are wheelchair-bound will not be able to attend. Indirect discrimination would be telling all the children to climb up some PE equipment to get a reward, and the boy in the wheelchair cannot. Stereotyping A stereotype is a belief about how all the people from certain groups of backgrounds behave or feel. If a nurse told a man to 'man up' if the man got emotional over something, because she believed that all men don't show their emotions. ...read more.

Differences and discrimination Differences are the ways in which one person isn?t like another; for example people have different religions, races, jobs, family statuses etc A secretary and a personal assistant do more or less the same job, however the difference in their job titles may mean that one gets a higher salary and treated as if they are higher up than the other. Teaching assistants being looked down on because they are not the main teacher, and being referred to as a ?helper? could make them feel as if they?re worthless. Labelling Labelling is when someone gets labelled, either positively or negatively. If someone gets labelled as ?lazy? working for someone, then they might not get offered jobs and opportunities which could help them excel in their career. If one child gets labelled as the ?naughty? child, this could make them believe that they should behave badly because they are naughty. Disadvantage Disadvantage is when someone is less advantaged than someone else, through no fault of their own and can lead to them being treated unfairly. If two people in a workplace were both offered a job which was located a few miles away, and one who was better for the new job couldn?t accept it because they didn?t have a ...read more.

When a child who gets bullied isn?t allowed on the playground in case he argues with other children and they hurt him. Interdependence Interdependence is when you rely on other people to help you do things. When someone is refused assistance because it is believed that they already have assistance from someone else. When one of the ?smarter? children who usually gets everything right is denied help with their work because the teacher believes they already understand it. Expectations Expectations are when someone expects something of a person, based on reasonable or unreasonable thing. If two people are doing the same task, and have to report back to a teacher who has very high expectations of one person, they may get criticised more than the other person. If two children are in the playground arguing, and one is always in arguments, so the teacher doesn?t tell him off as much as the child who rarely argues, who gets a bigger punishment. Abuse Abuse is when someone is taken advantage of in a negative way. It can be overt or covert. For example if a worker in a care home always hits a certain resident because they don?t like them. If a teacher pushes the children she doesn?t like around in the classroom if they are in her way. ...read more.