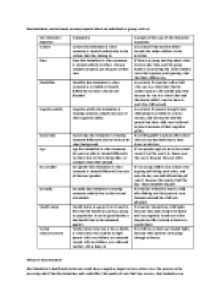 If a teacher refused to teach a child after finding out their parents were h********l and the child was adopted. Health status Health status is a generic term used to describe the health of a person, group, or population. It can be good health or bad health that is discriminated against If a teacher treated one child badly because they had a long term illness and was regularly in and out of the hospital so didn?t attend school on a regular basis. Family status/structure Family status/structure is how a family is structured, this could be a single parent with two children, or a married couple with no children, or a widowed mother with a baby etc. If a child in a school was treated badly because their parents were going through a divorce. Effects of discrimination Discrimination in health and social care could have a negative impact on how others view the person on the receiving end of the discrimination, and could affect the quality of care that they receive. ...read more.

Marginalisation Individuals who are discriminated against may cause them to marginalise themselves. This is when a person feels like they are not a part of the main group in society. Restricted opportunities Being discriminated in a health and social care setting may cause the individual to stop using that service, which could lead to poor health. Unemployment The presence of workplace discrimination can cause a person to not go into work in fear of being discriminated against, causing them to get in trouble with their boss and become unemployed. People could also not want to get a job in fear of discrimination, meaning they will stay unemployed. Lack of social cohesion Social cohesion is the bonds that join people in society, based on employment, income, health, education. Individuals may avoid social cohesion in fear of being discriminated against. Violence/Criminality Violence and/or crime can be caused by discrimination, due to people changing their behaviour because they are taking out their frustration on health care professionals who they might feel have discriminated them. This behaviour can be both verbal and physical. Loss of rights Loss of rights can occur through discrimination, for example people may use power to over-ride individual's basic rights. ...read more.