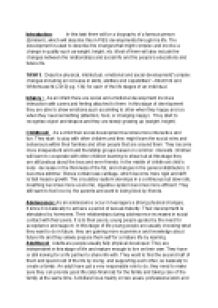 Unit 4, P1, development of an individual through the life stages.

﻿Introduction: In this task there will be a biography of a famous person (Eminem), which will describe this in PIES developments through his life. The development is used to describe the changes that might complex and involve a change in quality such as weight, height, etc. Most of them will also include the changes between the relationships and social life and the people?s educations and future life. TASK1: Describe physical, intellectual, emotional and social development(?complex changes including an increase in skills, abilities and capabilities? ?Stretch B and Whitehouse M (2010) pg. 134) for each of the life stages of an individual. Infancy : As an infant there are social and emotional development involves interaction with carers and feeling attached to them. In this stage of development they are able to show emotions such as smiling to other when they happy and cry when they need something (attention, food, or changing nappy). They start to recognise object and shapes and they are slowly growing up (weight, height). Childhood: As a child their social development becomes more interactive and fun. They start to play with other children and they might learn the social roles and behaviours within their families and other people that are around them. ...read more.

He had few friends but it was quite difficult for him to get closer to them, as he had only his mom before and he did not use to anyone else. He began rapping at the early age of 4, because he found this very interesting. He started his education when he was 5 and everything went good, especially his language. Unfortunately for Eminem he changed schools 2-3 times a year, because his mom decided to move between Missouri and Detroit as she could stay in work for more than few months. It has a bad effect on Eminem because he never could found a friend for longer than few months and he always was ?the new boy? in school, so everyone was against him and they bullied him(he got bullied because he was the only white kid in the area.)As I can imagine his childhood was very itinerant and it left a huge impact on Eminem?s personality, the reason why is that he had no friends, because sooner or later he had to move, so it means that he kept almost entirely to himself. It means that physically he could have some issues with his health. ...read more.

Elderly: In age of 67 Eminem?s wife and daughter had a car crush. He left alone. His whole life dramatically changed. As this adulthood was written before, we all know he gave himself to his family, his social live was shared with them both, he didn?t want to meet other people from the previous company because he wanted to chop off from everyone. As a result he left completely alone. The only one thing he was doing was drinking alcohol; he believed it is a medicine for his loneliness and he became addictive after few month. His physical health significantly deteriorated, because Eminem stopped to take care of himself, he didn?t go out, didn?t even tried to meet new people like in church, pubs or even on the street , he just avoided people. After few month he became an alcoholic and he started to lose his memory, it began from forgetting where has he put his money and finished at where does he live. He just went to shop to buy a beers and he got lost on the way.. he left on the street where he actually died of the coldness and obviously by his overall health. ...read more.