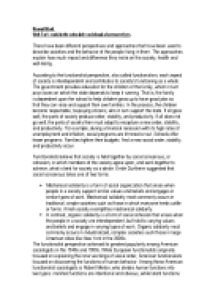 ﻿Naomi Ward Unit 7 p1: explain the principle sociological perspectives. There have been different perspectives and approaches that have been used to describe societies and the behavior of the people living in them. The approaches explain how much impact and difference they make on the society, health and well-being. According to the functionalist perspective, also called functionalism, each aspect of society is interdependent and contributes to society's functioning as a whole. The government provides education for the children of the family, which in turn pays taxes on which the state depends to keep it running. That is, the family is dependent upon the school to help children grow up to have good jobs so that they can raise and support their own families. In the process, the children become respectable, taxpaying citizens, who in turn support the state. If all goes well, the parts of society produce order, stability, and productivity. If all does not go well, the parts of society then must adapt to recapture a new order, stability, and productivity. For example, during a financial recession with its high rates of unemployment and inflation, social programs are trimmed or cut. Schools offer fewer programs. Families tighten their budgets. And a new social order, stability, and productivity occur. Functionalists believe that society is held together by social consensus, or cohesion, in which members of the society agree upon, and work together to achieve, what is best for society as a whole. ...read more.

He proclaimed that history is the chronology of class struggles, wars, and uprisings. Under capitalism, Marx continues, the workers, in order to support their families are paid a bare minimum wage or salary. The worker is alienated because he has no control over the labor or product, which he produces. The capitalists sell the products produced by the workers at a proportional value as related to the labor involved. Surplus value is the difference between what the worker is paid and the price for which the product is sold. Like functionalism, Marxism received criticism, they believed that the result of socialization behavior was brought from the behavior from the individuals of the social classes. Postmodernism is a general and wide-ranging term, which is applied to literature, art, philosophy, architecture, fiction, and cultural and literary criticism, among others. Postmodernism is largely a reaction to the assumed certainty of scientific, or objective, efforts to explain reality. In essence, it stems from a recognition that reality is not simply mirrored in human understanding of it, but rather, is constructed as the mind tries to understand its own particular and personal reality. For this reason, postmodernism is highly skeptical of explanations which claim to be valid for all groups, cultures, traditions, or races, and instead focuses on the relative truths of each person. In the postmodern understanding, interpretation is everything; reality only comes into being through our interpretations of what the world means to us individually. Postmodernism relies on concrete experience over abstract principles, knowing always that the outcome of one's own experience will necessarily be fallible and relative, rather than certain and universal. ...read more.

The new right regarded state support as intrusive and supporting dependency culture. Mrs. Thatcher and the party thought the welfare state produced a society in which people relied on state benefits rather then earning the money for themselves and planning futures for their own families. Feminism is seen as a conflict model by example. There are 3 feminist approaches, which are the Marxist feminism, radical feminism and liberal feminism. Marxism approach sees feminism as working class women. They are there for there children?s needs in life and getting ready for them to build their own futures, so they can work in offices and factories. They also see them as full time home mothers such as keeping the house clean, cooking the family dinner every night and looking after their partners or husbands, they do this for nothing. Women are often seen as dominated by their husbands and they also support the industry itself. It is seen as the woman/mother of the house holds responsibility for the domestics of life?s and getting the family ready for work. The radical feminism is seen differently, it is seen as the capitalism dominates the men in this situation and not the women. Families are seen as male-controlled. In this situation, they see women as housewives and full-time mothers of domination and this repression as a characteristic of nuclear family life. Liberal feminism thinks that changes have taken place in the societies of today. They think there is more equality because changes of attitudes have taken place such as changing the legislation; equal pay act 1970 and the sex discrimination act 1975. This suggests that developments will take place by the methods of legislation and policy. ...read more.