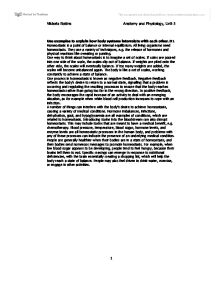 Use examples to explain how body systems interrelate with each other. D1

Use examples to explain how body systems interrelate with each other. D1 Homeostasis is a point of balance or internal equilibrium. All living organisms need homeostasis. They use a variety of techniques, e.g. the release of hormones and physical reactions like sweating or panting. One way to think about homeostasis is to imagine a set of scales. If coins are poured into one side of the scale, the scales slip out of balance. If weights are piled onto the other side, the scales will eventually balance. If too many weights are added, the scales will become unbalanced again. The body is like a set of scales, working constantly to achieve a state of balance. One process in homeostasis is known as negative feedback. Negative feedback reflects the body's desire to return to a normal state, signalling that a problem is occurring and regulating the resulting processes to ensure that the body reaches homeostasis rather than going too far in the wrong direction. In positive feedback, the body encourages the rapid increase of an activity to deal with an emerging situation, as for example when white blood cell production increases to cope with an infection. A number of things can interfere with the body's desire to achieve homeostasis, causing a variety of medical conditions. ...read more.

If the kidneys did not remove them, these wastes would build up in the blood and damage the body. The actual removal of wastes occurs in tiny units inside the kidneys called nephrons. Each kidney has about a million nephrons. In the nephron, a glomerulus-which is a tiny blood vessel, or capillary-intertwines with a tiny urine-collecting tube called a tubule. The glomerulus acts as a filtering unit, or sieve, and keeps normal proteins and cells in the bloodstream, allowing extra fluid and wastes to pass through. A complicated chemical exchange takes place, as waste materials and water leave the blood and enter the urinary system. In the nephron, tiny blood vessels intertwine with urine-collecting tubes. Each kidney contains about 1 million nephrons. At first, the tubules receive a combination of waste materials and chemicals the body can still use. The kidneys measure out chemicals like sodium, phosphorus, and potassium and release them back to the blood to return to the body. In this way, the kidneys regulate the body's level of these substances. The right balance is necessary for life. Most people believe that the filtering of wastes is the kidney's most important homeostatic role. However, in addition to removing excess salt, water, toxins, etc., they also release hormones. ...read more.