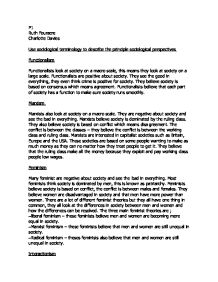 P1 Ruth Fouracre Charlotte Davies Use sociological terminology to describe the principle sociological perspectives Functionalism Functionalists look at society on a macro scale, this means they look at society on a large scale. Functionalists are positive about society. They see the good in everything, they even think crime is positive for society. They believe society is based on consensus which means agreement. Functionalists believe that each part of society has a function to make sure society runs smoothly. Marxism Marxists also look at society on a macro scale. They are negative about society and see the bad in everything. Marxists believe society is dominated by the ruling class. They also believe society is based on conflict which means disagreement. The conflict is between the classes - they believe the conflict is between the working class and ruling class. Marxists are interested in capitalist societies such as Britain, Europe and the USA. These societies are based on some people wanting to make as much money as they can no matter how they treat people to get it. They believe that the ruling class make all the money because they exploit and pay working class people low wages. ...read more.

(Preamble to the Constitution of the World Health Organization, 1946) P3 Ruth Fouracre Charlotte Davies Describe the biomedical and socio-medical models of health Biomedical Model of Health The biomedical model of health is used to bring down the number of morbidity and premature mortality rates. This model is the predominant model which is used by physicians in diagnosing diseases it's been used since the 19th century. The biomedical model looks at parts of the body that might work together to make sure we maintain good health. The body is seen as a machine and when part of it goes wrong it needs to be fixed in order for it to work again. It particularly looks at the biological causes of disease and ill health. The main focus of this model is the actual person not the social and emotional process of the individual. Its aim is to identify people who may be at risk of a disease. Another focus of the model is to treat diseases rather than prevent them. The biomedical model states than anyone who doesn't have a disease, pain or defect is healthy. This approach to health is used mainly in the Western World. ...read more.

The theory also states the rights a sick person has are they are allowed to refrain from participating in events, they don't have to go to work and do social activities because they are ill. Parsons believed that generally speaking society didn't hold people personally responsible for getting sick. Patterns of behavior expected of one who is sick--this role often exempts the person from their normal role obligations. http://sociology.socialsciencedictionary.com/Sociology-Dictionary/SICK_ROLE Clinical Iceberg The clinical iceberg is a term used to describe the large amount of unreported illness and disease. A lot of people don't go to the doctors when they are ill and this leads to a lot of illness going unreported. The medical statistics by doctors always create information about disease which are used on government healthcare policies but there are a number of illnesses and diseases that aren't reported, so the statistics are 100% accurate. Clinical Iceberg is a term used to describe the large amount of illnesses that go unreported. For example, Medical Statistics are created based on information from the doctors, these statistics go on to make government policies on healthcare. According to Last (1963) as much as 94% of illness is not reported to doctors. It is the vast amount of unreported illnesses that are known as the 'Clinical Iceberg' http://wiki.answers. ...read more.