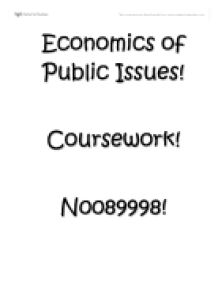 What are the advantages and disadvantages of an 'internal market' (quasi-market) in the NHS in the UK?

Economics of Public Issues! Coursework! N0089998! Economics of Public Issues (ECON20091) Coursework N0089998 Question! What are the advantages and disadvantages of an 'internal market' (quasi-market) in the NHS in the UK? Answer! A quasi-market is an attempt to stimulate the operation of a competitive market within the public sector. In other words it is a public sector institutional structure that is designed to obtain the efficiency gains of free markets without losing the equity benefits of traditional systems of public administration and financing. A notable example would be the NHS Internal Market (introduced in 1990). Towards the end of the 1980s the Thatcher government began to look at extending the idea of privatisation into welfare services in the UK. However, straightforward privatisation of such services would be politically unacceptable - for example, the NHS is still held in high regard and voters expect it to be operated as a 'public service'. Therefore, a means had to be devised to introduce some of the beneficial characteristics of privatisation (pressure to reduce costs, increased choice) without losing those public service characteristics (e.g. ...read more.

We are also seeing a variety of organisational forms emerging where experimentation is taking place. Groups of FH practices are emerging, pooling their administration and purchasing and thus reducing costs. Another reason for increased efficiency was as a result that hospitals now needed to offer procedures at lower costs in order to win patients and funding, but without losing the main equity benefits of the NHS (healthcare remained free at the point of service and financed through taxation). Another advantage we can talk about is equity: although conventional markets can result in considerable inequalities of outcome, it is sometimes argued that state provision has done much better in this regard. Typically, the middle classes make more and better use of the services on offer. They are better informed about availability of health services; they can easily take time off work to go to the GP; they are better able to argue for preferential treatment. Hence it can be argued that quasi-markets could improve equity. Advocates of the reforms argue that advantages will only be fully realized in the long run as the system's efficiency improves. ...read more.

It is becoming clear that the number of patients struck off doctors' lists has increased substantially over the last two or three years. It is often argued (by the doctors) that these are often abusive or aggressive patients, but the suspicion remains that financial considerations are also relevant. If patients have no choice over treatment then the welfare state will not be responsive to the increasing demands of their 'customers'. It is not clear therefore that choice is working properly - in some cases the suppliers are choosing the customers rather than the other way round. Also quality can be seen as another drawback: if organisations are pressured to reduce costs, one way they might do it is simply by reducing quality. If quasi-markets are to be successful, the maintenance of quality must be guaranteed in some way (P.T.O) Over all, in my point of view I feel that there are more disadvantages than advantages and hence the evidence is mixed - quasi-markets can do some good but are not always ideal. When dealing with complex 'products' such as health and education which have many attributes, a contractual market may not work effectively. We need a degree of 'managed competition' and this is lacking in certain areas. ...read more.