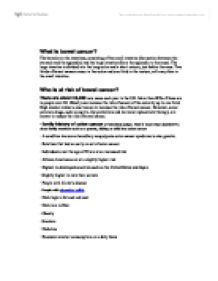 What is bowel cancer

What is bowel cancer? The bowels are the intestines, consisting of the small intestine (the section between the stomach and the appendix) and the large intestine (from the appendix to the anus). The large intestine is divided into the long colon and a short rectum, just before the anus. Two thirds of bowel cancers occur in the colon and one third in the rectum, with very few in the small intestine. Who is at risk of bowel cancer? There are about 35,000 new cases each year in the UK. More than 80% of these are in people over 60. Obesity can increase the risk of cancer of the colon by up to one third. High alcohol intake is also known to increase the risk of bowel cancer. However, some common drugs, such as aspirin-like painkillers and hormone replacement therapy, are known to reduce the risk of bowel cancer. � family history of colon cancer or intestinal polyps. Risk is more than doubled if a close family member such as a parent, sibling or child has colon cancer. ...read more.

Signs and Symptoms of Colon Cancer Unfortunately, often colon cancer does not show any symptoms until in its later stages. Here is a list of common signs to look for. � Blood in the stool is the number one symptom � Bleeding from the rectum � Abdominal pain � Weight loss � Nausea � Vomiting � Constipation or diarrhea � Change in bowel habits � Change in stool shape or size, including narrowing stools � Fatigue due to bleeding in stools Colon Cancer Stages Colon cancer can be broken down into 5 stages. Here is a brief outline of each one. Stage 0- Cancer is confined to outside colon wall. Stage 1- Cancer has spread to second and third layer of the wall. Stage 2- Cancer has spread beyond and through the colon wall. Lymph nodes are not yet invaded by cancer. Stage 3- Cancer has spread to lymph nodes. Stage 4- Cancer has spread to organs and is in the most advanced stage. Screening and diagnosis There are several ways in which we can screen for bowel cancer. ...read more.

Chemotherapy is often used to cut down on reoccurrence. There are several different types of chemotherapy. Intra-Arterial chemotherapy aims high levels of chemotherapy at recurrent tumors. Fractionated Dose Chemotherapy attempts to divide up strong doses into smaller ones which are administered over a period of days. This therapy aids in the reduction of side effects from chemotherapy because these doses are not as potent. Your doctor will want to determine what stage cancer you are in to properly treat you. Side effects such as hair loss, nausea and vomiting are common. Immunotherapy This type of cancer therapy is also referred to as biological therapy. Immunotherapy uses your body's immune system to reduce the side effects caused by chemotherapy, radiation and other types of treatments that may cause damage to cells. This therapy is also used to combat the cancer itself. If this type of therapy works, it can repair and increase your body's immune system. How effective is the treatment? If diagnosed early, before the tumour has spread from the bowel, these treatments are very effective, with about 90% of patients alive five years after diagnosis. However, if the cancer is advanced at the time of diagnosis (i.e. it has spread to the lymph nodes) only about half of the patients survive for five years. ...read more.