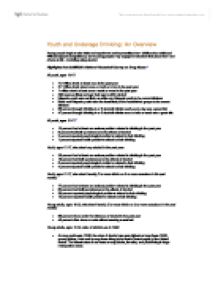 Youth and Underage Drinking: An Overview

Survey results also show that 81 percent of 8th graders, 70 percent of 10th graders, and 65 percent of 12th graders, disapprove of this quantity and rate of alcohol consumption.16 * Seventy-five percent of 8th graders and 89 percent of 10th graders believe that alcohol is readily available to them for consumption.17 * Eighty percent of 12- to 17-year-olds surveyed think that alcohol negatively affects scholastic performance, and 81 percent believe it increases the likelihood of getting into trouble.18 * Twenty-two percent of youth under age 18 report drinking at least once a week.19 Risk Factors for Adolescent Alcohol Use The reasons why adolescents use alcohol are complex but include curiosity, a need to fit in with friends, and a desire to relax and escape problems.20 For some, additional factors may be involved. Highlights from the National Institute on Alcohol Abuse and Alcoholism Alcohol Alert on Youth Drinking21 include the following risk factors: * Genetic Factors: Children of alcoholic are significantly more likely to initiate drinking during adolescence and to develop alcohol use disorders, but the relative influences of environment and genetics have not been determined and vary among young people. * Childhood Behavior: Research has shown that children who are very restless and impulsive at age 3 are twice as likely to be diagnosed with alcohol dependency at age 21. Aggressiveness in children as young as ages 5 to 10 has been found to predict alcohol and other drug use in adolescence. * Psychiatric Disorders: Among 12- to 16-year-olds, regular alcohol use has been significantly associated with conduct disorder; in one study, adolescents who reported higher levels of drinking were more likely to have conduct disorder. ...read more.