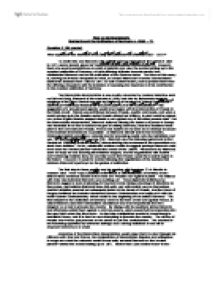 Year 12 AS Coursework Bismarck and the Unification of Germany c. 1848 - 71 Question 2 (50 marks) "How significant was Bismarck in securing the unification of Germany 1862 - 1871?" To credit Otto von Bismarck with uniting Germany throughout the period of 1862 to 1871 seems absurd, given his "contempt for nationalism and liberalism"(i). However, there are several perspectives on which a historian can view the events leading up to the eventual unification of Germany, all with differing attitudes towards exactly how attributable Bismarck was for the unification of the German states. The focus of this essay is, bearing all of these viewpoints in mind, to analyse Bismarck's motives and intentions behind his decisions from 1862 to 1871 as well as other factors, and to present them from the differing viewpoints with the intention of assessing the importance of his contribution to the eventual unification of Germany. The Bismarckian interpretation is one mostly advocated by modern historians such as Gall and Craig, Bismarck in his memoirs of 1890, and also by statements made by ministers of the time: Disraeli was told by Bismarck of his plans to "attack Denmark in order to get Schleswig-Holstein; he will put Austria out of the confederation." ...read more.

The manoeuvre to aid Russia in the Polish revolt was more self-preservation than anything else; practically speaking, Bismarck sealed off the borders with Poland to prevent the riots spreading to Prussia and its lot in Poland. It is quite possible that Bismarck was first and foremost a pragmatist, with the aim of expanding Prussian territory as much as possible but with events leading, quite accidentally, to the unification of Germany - similar in many ways to Cavour in Italy. His decisions in Schleswig-Holstein again could be interpreted as a move to prevent it's independence, as this would prove a formidable barrier to annexation. While it is difficult to argue Bismarck did not in some way pre-plan this - many decisions made by Bismarck indicate he was antagonising Austria into war - the logical reason for his doing so is more in line with his own 'realpolitik' ideals than the romanticist notions he ridiculed. As Michael John states in The Unification of Germany, "Bismarck's only clear policy was his determination to prevent any attempt by the Austrians to reassert their leadership of the German States. Bismarck certainly entertained the idea of a united 'Kleinduschland' under Prussian domination, but he was not committed to fighting a war to make this possible." ...read more.

His statesmanship and ability to manipulate the political and international situation of the time are undeniable, but the factors he was not able to foresee and prepare for are evidence that Bismarck had not masterminded the entire series of events, and could not be credited for them except if to congratulate his 'strategy of alternatives'. It could be argued that his significance in unifying Germany stretched only as far as his ability to facilitate current events to successfully secure the next - for example, had Austria had won the war against Prussia, there would have been little hope for the creation of a North German Confederation and France would never have intervened. Bismarck was ostensibly the most important factor in the unification of Germany in 1871 - of course, Prussia was gaining strength and the international situation was ripe for a change in the balance of power, but it took the Prussian minister-president to utilise these individual factors for the eventual formation of a united Germany, whether it was his original intention or not. (i) Whitfield, Germany 1848 - 1914 (ii) Michael John, The Unification of Germany (iii) Breuilly, The First German Unification, 1847-71 (iv) Smith, Bismarck's planning of German Unification (v) Breuilly, The First German Unification, 1847-71 (vi) AJP Taylor, The Struggle for Mastery in Europe (vii) Whitfield, Germany 1848 - 1914 (viii) Michael John, Early Modern History ...read more.