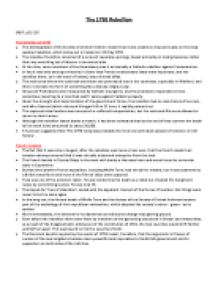 ﻿The 1798 Rebellion (A&P, p21-23) The rebellion of 1798 1. The disintegration of the Society of United Irishmen meant that it was unable to impose its grip on the long-awaited rebellion, which broke out in Ireland on 23 May 1798. 2. The rebellion therefore consisted of a series of separate uprisings, based primarily on local grievances rather than any overriding set of ideas or a concerted plan. 3. At the time, some members of the Ascendancy saw it as basically a Catholic rebellion against Protestantism. 4. In fact it was only among a minority in Ulster that French revolutionary ideas were important, and the rebellion there, as in the west of Ireland, was a limited affair. 5. The main area where the outbreak was bitter and protracted was in the southeast, especially in Wexford, and there it did take the form of something like a bloody religious war. 6. Groups of Protestants were massacred by Catholic insurgents, and the yeomanry responded in kind, sometimes resorting to a 'scorched earth' policy against Catholic property. 7. Given the strength and determination of the government forces, the rebellion had no real chance of success, and after General Lake's victory at Vinegar Hill on 21 June, it rapidly petered out. 8. The captured rebel leaders were executed or suffered transportation, but the rank-and-file were allowed to return to their homes. 9. Although the rebellion lasted barely a month, it has been estimated that by the end of that summer the death toll on both sides amounted to about 30,000. 10. It has been suggested that 'The 1798 rising was probably the most concentrated episode of violence in Irish history'. French invasion 1. The fact that it was only in August, after the rebellion was more or less over, that the French made their invasion attempt ensured that it was virtually a doomed enterprise from the start. 2. ...read more.

2. But if this represented an innovation then the simultaneous survival of older forms of action and discourse meant that the ensuing reality was neither simple nor unambiguous. 3. Almost every interest was engaged upon an attempt to rescue something from the wreckage of the 1798 rebellion and the consequent Act of Union of 1800, for these together constituted that remarkable equation - a defeat for almost everyone and a victory for almost nobody at all. The Union and its context 1. The political and economic ascendancy of the landed classes reached its peak about the middle of the eighteenth century, but from then onwards was increasingly challenged by a growing urban and trading middle class (which included many successful Catholic merchants). 2. Simultaneously a widening rural unrest manifested itself through the activities of agrarian secret societies - first specifically and then generically known as Whiteboyism - which, though not aimed at landed proprietors alone, helped to destabilize the existing political culture in at first minor and then more serious ways. 3. Furthermore, the various measures of Catholic relief passed by the exclusively Protestant Irish parliament in 1778, 1782, and 1793, which broadly allowed Catholics to hold land in the normal way and eventually granted them the vote, were actually imposed by the British government, so that articulate Catholics began more and more to see London rather than Dublin as the source of reform and political amelioration. 4. But revolutionary events in North America and France encouraged those of more radical tendencies to look to new shifts and expedients. 1. The Society of United Irishmen established in 1791 as the chief focus for such aspirations was and remained an eclectic organization. Increasingly revolutionary - and as a consequence losing a good deal of moderate support - it contained representatives of the three major religious traditions in Ireland: Roman Catholic, Church of Ireland (Anglican), and Presbyterian. ...read more.

1. Ominously the centres of revolt in May and June 1798 were located in Wexford and parts of south-eastern Ulster - both of them regions containing substantial numbers of Protestants and Catholics. The revolutionary contacts between the two areas proved virtually non-existent. 2. Indeed, the rebellion(s) of 1798, though initially planned to demonstrate an essential unity among Irishmen of every belief and station in life, ended up by revealing the exact opposite. 3. Neither the savage peasant populism that marked aspects of the Wexford rising nor the biblical millenarianism that, in the event, encouraged some northern Presbyterians to take part owed much to the United Irishmen. 4. The hoped-for French help arrived too late, though General Humbert's tiny thousand-strong army which landed in County Mayo in August showed what might have been achieved with larger forces more carefully despatched. 5. The government received a severe fright, but emerged triumphant in the end. Tone was captured and committed suicide in prison having proved unable to ride the tiger he had so desperately attempted to mount. 1. While possibly as many as 50,000 men 'turned out' during 1798 - something of undoubted significance - they left their homes to fight for causes so different and sometimes contradictory that their actions almost certainly widened rather than narrowed the existing divisions of Irish society, above all those between Protestant and Catholic and between North and South. 2. And the savage reprisals which followed rubbed yet further salt into the fissured wounds thus so dramatically deepened and displayed. 3. In the longer term the effects of all this were of profound importance for Irish politics. 1. The secular republicanism of Tone, though not entirely destroyed, was to survive largely through the muffled and garbled filter produced by the sectarian concerns of the Defender tradition. 2. As a result Irish republicanism became an extremely eclectic phenomenon from which almost all groups could pick what they wanted and reject what they disliked. 3. Humanitarian philosophy jostled with sectarian triumphalism. ...read more.