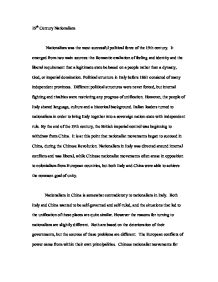 19th Century Nationalism Nationalism was the most successful political force of the 19th century. It emerged from two main sources: the Romantic exaltation of feeling and identity and the liberal requirement that a legitimate state be based on a people rather than a dynasty, God, or imperial domination. Political structure in Italy before 1861 consisted of many independent provinces. Different political structures were never forced, but internal fighting and rivalries were restricting any progress of unification. However, the people of Italy shared language, culture and a historical background. Italian leaders turned to nationalism in order to bring Italy together into a sovereign nation-state with independent rule. By the end of the 19th century, the British imperial control was beginning to withdraw from China. It is at this point that nationalist movements began to succeed in China, during the Chinese Revolution. ...read more.

As the Europeans continued to impede, nationalist movements rose in an attempt to expel the foreign influence and gain independence. Nationalism generally is pride in one's country, but in Italy, it also came to mean pride in one's ethnicity, because all of the small provinces and principalities had the same language, culture and a historical background. There was almost no respect for the existing governments by the public and the desire for a unified Italy grew. Garibaldi and Cavour were main figures in the unification of Italy, as they were the driving force of unification. This is different from China because China was considered to be under the control of the British. Britain never completely controlled the Chinese government, but heavily influenced political and social affairs. Later on, Britain began to pull out of China, thus allowing nationalist movements to succeed, and allowing the Chinese Revolution to occur. ...read more.

This revolution was led by Sun Yixian who eventually established a democratic government. He was elected as a temporary president. His main goals as leader were to restore the tarnished Chinese tradition and culture, while removing influence of the previous European rule. Jiang Jieshi later came and took over the democratic rule, who continued to rule China under this unified state The unification of Italy and the Chinese revolution are two of the most dramatic effects from nationalism. The unification of Italy was caused by internal conflicts between the small principalities that Italy was comprised of. This was different from China because the Chinese Revolution was caused by intolerable European influence. We see the importance of political leaders during this time, because they make the dream of nationalism a reality. Nationalism was the dominant force of unification in the nineteenth century, and the power of nationalism is shown by the severity of these two nationalist movements ...read more.