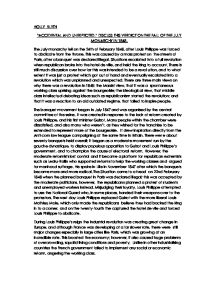 ACCIDENTAL AND UNEXPECTED. DISCUSS THIS VERDICT ON THE FALL OF THE JULY MONARCHY IN 1848.

HOLLY BLYTH "ACCIDENTAL AND UNEXPECTED." DISCUSS THIS VERDICT ON THE FALL OF THE JULY MONARCHY IN 1848. The July monarchy fell on the 24th of February 1848, after Louis Philippe was forced to abdicate from the throne. This was caused by a mass protest on the streets of Paris, after a banquet was declared illegal. Situations escalated into a full revolution when republican broke into the hotel de ville, and held the king to account. There is still much discussion over how far this was intended to be a revolution, and to what extent it was just a protest which got out of hand and eventually escalated into a revolution which was unplanned and unexpected. There are three main views on why there was a revolution in 1848: the Marxist view, that it was a spontaneous working class uprising against the bourgeoisie; the ideological view, that middle class intellectual debating ideas such as republicanism started the revolution; and that it was a reaction to an old outdated regime, that failed to inspire people. The banquet movement began in July 1847 and was organised by the central committee of the seine. ...read more.

Also, many of them had invested in the railways, and they lost their money after the stock exchange collapsed leaving them even more aggravated by the situation. Some of the members of the banquet movement had been calling for a republic, and the banning of one of their event was the spark that started the protest. In addition to this, it was the middle classes who made up the national guard who crucially defected to the revolution by handing over their weapons, meaning it was less of a working class uprising than Marx argued. This would mean that it was far more ordered, and the discontent of the middle class meant that it was more predictable than some would argue. An alternate interpretation of the 1848 revolution was that it was an ideological revolution, led by intellectuals, and that even though the workers did turn out in force; it seems unlikely they would have if it had not been for the intellectual questioning of the government. France had been through a turbulent political climate since the first French revolution in 1989, and the revolution of 1848 was the logical conclusion to be drawn from the development of new political ideas, Furthermore, the previous attempts to restore ...read more.

would have had the ability to orchestrate the uprising effectively without the support of the middle classes, who made up the national guard who handed over their weapons. The middle classes were dissatisfied with their bourgeois monarch who failed to meet their needs, and many of the intellectuals among them had developed comprehensive alternative systems of republicanism, and socialism, which were debated in full throughout his reign, and were reminiscent of the first revolution. These ideas however had been around for a while, and their level of influence may have been exaggerated, and the main middle class supporters of reform wanted to alter the current system not create a new one. Therefore the revolution of 1848 was in a way accidental, as the events of the day were meant as not more than a protest against the banning of the banquet movement, however in the long term it looked like there was widespread support for change, and those who desired a new system of government took the opportunity to make a move while the king was on the back foot, and as the king had no real supporters everyone just allowed him to be overthrown, meaning a revolution could hardly have been called an unexpected even. ...read more.