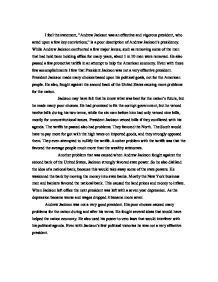 Andrew Jackson was an effective and vigorous president, who acted upon a few key convictions,

I feel the statement, "Andrew Jackson was an effective and vigorous president, who acted upon a few key convictions," is a poor description of Andrew Jackson's presidency. While Andrew Jackson confronted a few major issues, such as removing some of the men that had hold been holding office for many years, about 1 in 10 men were removed. He also passed a few protective tariffs in an attempt to help the American economy. ...read more.

He had promised to fix the corrupt government, but he vetoed twelve bills during his two terms, while the six men before him had only vetoed nine bills, mostly for unconstitutional issues. President Jackson vetoed bills if they conflicted with his agenda. The tariffs he passed also had problems. They favored the North. The South would have to pay more for got with the high taxes on imported goods, and they strongly opposed them. ...read more.

Mostly the New York business men and bankers favored the national bank. This caused the land prices and money to inflate. When Jackson left office the next president was left with a seven year depression. As the depression became worse and wages dropped it became more sever. Andrew Jackson was not a very good president. His poor choices caused many problems for the nation during and after his terms. He fought several ideas that would have helped the nation economy. He also used his power to veto laws that would interferer with his political agenda. Even with Jackson's few political victories he was not a very effective president. ...read more.

The essay is mostly focused on reasons why Jackson was a bad president when the student in fact needs to focus on both sides of the argument, because it shows they are able to think widely and understand that there ...

The essay is mostly focused on reasons why Jackson was a bad president when the student in fact needs to focus on both sides of the argument, because it shows they are able to think widely and understand that there is more than one opinion on historical events. The student could improve this by devoting a whole paragraph to the two positive things they mentioned in the introduction - removing office holders and helping the economy. However, the essay doesn't wander off into other areas and stays focused on Jackson, which is good as it shows the student has enough knowledge to stick to the question.

Some of the evidence used in the essay is good, such as "1 in 10 men were removed". But it isn't clear whether the student thinks this is a good thing or not. They could improve by explaining why this was significant - they could say something like "This is actually a relatively small amount of people, showing that Jackson failed in his attempt to bring in new people." At some points, the essay goes into too much detail without explaining the significance of the detail - the third paragraph doesn't start talking about the cause or the effects of Jackson's actions until the fifth sentence. The conclusion is good as it is because it reaches a judgement, showing that the student can identify a strong argument and choose it as the most important. But because the essay itself doesn't consider both sides of the argument, the conclusion is let down. This is why it is important to consider more than one interpretation and keep it up for the whole essay, or else it lets all of it down. It is important to go into detail when explaining things, but not go into detail when describing things - anyone can learn details of an event, but it takes judgement and historical knowledge to explain why they were important. "President Jackson was not a very effective president. President Jackson made many choices based upon his political goals, not for the American people..." suggests that you are only an effective president if you make choices for the American people, but doesn't say why. It would be better to explain that Jackson could be interpreted as someone who was effective at hitting his political goals, but he could also be interpreted as someone who was effective at working for the American people. You could then do a paragraph on each to show you are considering the two sides of the argument.

The student repeats "President Jackson" quite a lot - there is no need to say "President" at all because it is clear who you are referring to if you say "Jackson", and the student could also say "he" more often, as repetition of "President Jackson" in nearly every sentence makes the essay sound repetitive and like a story. The sentences are also quite short, which adds to the sense that it is being told like a story (see Level of analysis section). However, the essay's quality of writing benefits from the use of technical terms like "cause", such as "This caused the land prices and money to inflate". Words like "cause" often appear in mark schemes and are better than phrases you'd find in a story, like "and then land prices and money inflated", because it shows you have a full understanding of how one event in history causes another to happen.