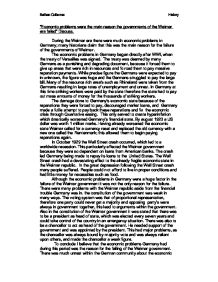 Economic problems were the main reason the governments of the Weimar era failed Discuss.

"Economic problems were the main reason the governments of the Weimar era failed" Discuss. During the Weimar era there were much economic problems in Germany; many historians claim that this was the main reason for the failure of the governments of Weimar. The economic problems in Germany began directly after WWI, when the treaty of Versailles was signed. The treaty was deemed by many Germans as a punishing and degrading document, because it forced them to give up areas that were rich in resources and forced them to pay massive reparation payments. While precise figure the Germans were expected to pay in unknown, the figure was huge and the Germans struggled to pay the large bill. ...read more.

In October 1929 the Wall Street crash occurred, which led to a worldwide recession. This particularly effected the Weimar government because they were so dependent on loans from American banks. The crash led Germany being made to repay its loans to the United States. The Wall Street crash had a devastating effect to the already fragile economic state in the Weimar republic. In the great depression following the Wall Street crash many people suffered. People could not afford to live in proper conditions and had little money for necessities such as food. Although the economic problems in Germany were a huge factor in the failure of the Weimar government it was not the only reason for the failure. ...read more.