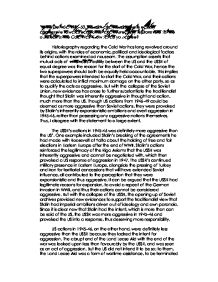 In the period 1945-50, the USA and the USSR were equally aggressive towards each other and thus equally responsible for the outbreak of the Cold War. How far do you agree?

"In the period 1945-50, the USA and the USSR were equally aggressive towards each other and thus equally responsible for the outbreak of the Cold War." How far do you agree? Historiography regarding the Cold War has long revolved around its origins, with the roles of economic, political and ideological factors behind actions examined ad nauseam. The assumption asserts that mutual acts of intended hostility between the US and the USSR of equal degree was the reason for the start of the Cold War, hence the two superpowers should both be equally held accountable. This implies that the superpowers intended to start the Cold War, and their actions were calculated to inflict maximum damage on the other party, so as to qualify the acts as aggressive. But with the collapse of the Soviet Union, new evidence has arose to further substantiate the traditionalist thought that Stalin was inherently aggressive in thought and action, much more than the US. Though US actions from 1946-49 could be deemed as more aggressive than Soviet actions, they were provoked by Stalin's inherently expansionistic ambitions and overt aggression in 1945-46, rather than possessing any aggressive notions themselves. ...read more.

US actions in 1945-46, on the other hand, were definitely less aggressive than the USSR because they lacked the intent for aggression. The abrupt end of the Land Lease Aid with the end of the war was looked upon less than favourably by the USSR, and was seen as an act of aggression. But the US did not intend it to be so; to them, the Land Lease Aid was a form of wartime assistance, to be terminated upon the end of the war. The delay in the opening of the second front during WWII was seen by the USSR as a deliberate act of aggression, with the consequence being Soviet forces being forced to bear the full weight of the German onslaught for a longer period of time. But it can be argued the Americans were merely being concerned for the welfare and lives of their own soldiers, for which they were definitely accountable to the American people, something that Stalin was foreign to. The US had every intention of brokering a peaceful post-war relationship with the USSR, as Truman was influenced by the American people's desire for peace, until aggressive actions by the USSR like the aforementioned as well ...read more.

The USSR also accelerated the Sovietisation of Eastern Europe after the implementation of the Marshall Plan by the US. The increasing affluence of Bizonia and the creation of the Deutschmark in 1948 also led Stalin to impose the Berlin Blockade, which spectacularly failed. The Berlin Blockade then led to the formation of NATO, consolidating Europe's split into 2 camps. In conclusion, it can be seen how initial and intended Soviet aggression in 1945 led the US to change its pacifist stance in 1946 to an equally aggressive one in 1947 through the Truman Doctrine. Stalin's imperialistic ambitions were fuelled partly by ideology and partly by insecurity, and it can be seen how his perception of the world influenced Truman's worldview to change and follow suit. With Stalin being the provocateur as well as the man with the expansionistic ambitions, it can thus be seen how the USSR was more aggressive in 1945-46, leading to equal American aggression in 1947-48, and thus the USSR should be more responsible for the outbreak of the Cold War, reflecting the Post-post revisionist school of thought. ...read more.