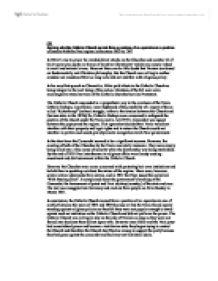 In the years 1933 &quot; 1945 the German Churches supported and collaborated with the n**i regime far more than they opposed it(TM) Explain why you agree or disagree with this view.

(A) Explain why the Catholic Church moved from a position of co-operation to a position of conflict with the n**i regime in the years 1933 to '39? In Hitler's rise to power he avoided direct attacks on the Churches and number 24 of his 25 point plan spoke in favour of 'positive Christianity' which was closely linked to racial and national views. However there can be little doubt that Nazism was based on fundamentally anti-Christian philosophy. But the Church was willing to neither condone nor condemn Hitler so long as he did not interfere with religious policy. In his very first speech as Chancellor, Hitler paid tribute to the Catholic Church as being integral to the well being of the nation. Members of the SA were even encouraged to attend services of the Catholic churches but also Protestant. The Catholic Church responded in a sympathetic way to the overtures of the Nazis. Catholic bishops, in particular, were frightened of the possibility of a repeat of the so called 'Kulturkampf' (cultural struggle, refers to the tension between the Church and German state in the 1870s) So, Catholic Bishops were concerned to safeguard the position of the church under the Nazis and in July 1933 a Concordat was signed between the papacy and the regime. ...read more.

However, there is much evidence that the Churches disagreed with the Nazis on a number of issues. The n**i ideology regarding the supreme Aryan race and Hitler's final solution completely opposed Christian morality and values. The totalitarian nature of the n**i regime should have caused friction between the Churches and Nazis; both groups aimed to be the main authority of the German community; this is illustrated paramount through the Churches community groups and schools, those which Hitler aimed to replace. This suggests that both are a threat to each other's power, indeed Hitler would not have attempted to weaken the Churches if they had posed little threat to the n**i regime and his aims. Hitler attempted to weaken the Churches through three stages: control, weaken, and then replace. He approached the two main Christian denominations, Protestantism and Catholicism, very differently. Hitler began by establishing the Reich Churches, an umbrella organization which incorporated all the Protestant Churches under former n**i minister Ludwig Muller. There was an opposing group which resisted the Nazis; a splinter group consisting of 500 pastors who rejected the Nazis, the Confessional Church. However, it is most likely that this Church, founded by Martin Niemoller among others and later joined by Dietrich Bonhoffer, opposed state intervention within the Church rather than specifically the n**i Party's policies and ideals. ...read more.

The Catholic Church did the same; Hitler simply approached this Church differently with the Concordat which they were forced to sign to remain indifferent. This is proven by Pope Pius XII's refusal to ex-communicate Catholics participating in the genocide, further by the many rumours that local catholic priests were in knowledge of the final solution and never protested. Hitler's aims regarding the Churches were most successful among Protestants, although this is predictable as they are a less totalitarian denomination than Catholics. The collaborations were very sparse, and the resistance was from individual Christians rather than the powerful Churches that Hitler was concerned with. Hitler was successful in extending n**i influence into religion to a certain extent; the fact that he totally failed to replace religion with the German Faith Movement shows that the Churches were an incredibly powerful force within Germany, and Christianity flourished once more in Germany after the war. The Churches' silence over n**i policies is a very controversial issue, the Catholic Church remains to deny all knowledge of the genocide, and this silence illustrates the fear that the Churches felt towards the Nazis; the Churches compromised in order to survive. Also, the Churches were more concerned with defending their institutions than opposing the Nazis on a broader front. Dom Ansell L6P ...read more.