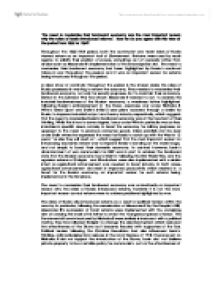 The need to modernise their backward economy was the most important reason why the rulers of Russia introduced reforms. How far do you agree with this view of the period from 1855 to 1964?

'The need to modernise their backward economy was the most important reason why the rulers of Russia introduced reforms.' How far do you agree with this view of the period from 1855 to 1964? Throughout the 1855-1964 period, both the communist and tsarist rulers of Russia viewed reform as an important tool of Government. Reforms were used by each regime to solidify their position of power, sometimes out of necessity rather than choice such as Alexander II's implementation of the Emancipation Act. The need to modernise their backward economy had been highlighted by Russia's continual failure in war throughout the period, and it was an important reason for reforms being introduced throughout the period. A clear show of continuity throughout the period is the shared desire the rulers of Russia possessed in wanting to reform the economy. They needed to modernise their backward economy not only for security purposes, but to maintain their autocracy. Defeat in the Crimean War had shown Alexander II needed to act to address the industrial backwardness of the Russian economy, a weakness further highlighted following Russia's embarrassment in the Russo Japanese war under Nicholas II. ...read more.

The rulers of Russia also introduced reforms as a result of political tension within the country. In particular, following the assassination of Alexander II by the People's Will, Alexander III's succession of harsh reforms were implemented with the underlying aim of undoing the work of his father to avoid the 'dangerous spread of ideas'. The Fundamental Laws introduced by Nicholas II were similarly introduced with a political motive, they had allowed Stolypin to change the electoral system which reduced the effectiveness of the Duma as it became flooded with supporters of the Tsar. Political tension following the October Revolution had also influenced Lenin's thinking, acknowledging land seizures in the Land Decree of 1918. However just as Nicholas II did not support the introduction of the Duma, Lenin did not believe private property to be a suitable policy for communism. Just as the effectiveness of the Duma had been reduced by the Fundamental Laws, Lenin sent in the requisitioning squads. Social reform was an important reason behind Lenin's policy of war communism too, as the Civil War had shown that the peasantry were bitterly opposed to the requisition squads. ...read more.

Khrushchev's decision to introduce large scale consumer industry as opposed to undergoing further major industrialisation showed that the need to modernise the backward economy was not the main reason for reform, instead focusing on improving the standard of living for the average Russian. The need to modernise their backward economy was undoubtedly a factor taken into account by the rulers of Russia when introducing reforms. However, it was not the main reason for reform being implemented. War was the integral factor of Russian development throughout the period as it consistently highlighted weaknesses in the Russian state. The Crimean War had caused the emancipation of the serfs, the Russo Japanese war had led to the October Manifesto and the First World War ultimately led not only to the deposition of the Romanovs, but to the creation of Russia as the world's first communist state. A consistent feature throughout the period is the way in which war highlighted the need for reform within Russia, despite the need to modernise their backward economy being a factor, it was often with the aim of increasing military spending or simply to catch up with the Western nations. ...read more.