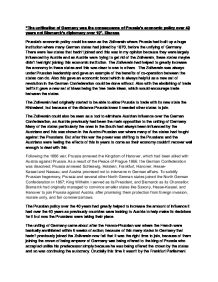 The unification of Germany was the consequence of Prussias economic policy over 40 years not Bismarcks diplomacy over 10. Discuss

“The unification of Germany was the consequence of Prussia’s economic policy over 40 years not Bismarck’s diplomacy over 10”. Discuss

Prussia’s economic policy could be seen as the Zollverein where Prussia had built up a huge institution where many German states had joined by 1870, before the unifying of Germany. There were few states that hadn’t joined and this was in my opinion because they were largely influenced by Austria and as Austria were trying to get rid of the Zollverein, these states maybe didn’t feel right joining this economic institution. The Zollverein had helped to greatly increase the economy in these states and this was clear to see to others.  The Zollverein was always under Prussian leadership and gave an example of the benefits of co-operation between the states can do. Also this gave an economic boost which is always helpful as a new set of revolution in the German Confederation could be done without. Also with the abolishing of trade tariffs it gave a new set of ideas being the free trade ideas, which would encourage trade between the states.

The Zollverein had originally started to be able to allow Prussia to trade with its new state the Rhineland, but because of the distance Prussia knew it needed other states to join.

The Zollverein could also be seen as a tool to eliminate Austrian influence over the German Confederation, as Austria previously had been the main opposition to the uniting of Germany. Many of the states particularly the ones in the South had always been influenced by the Austrians and this was shown in the Austro-Prussian war where many of the states had fought against the Prussians. But after this war the power was shifting to the Prussians and the Austrians were feeling the effects of this in years to come as their economy couldn’t recover well enough to deal with this.

Following the 1866 war, Prussia annexed the Kingdom of Hanover, which had been allied with Austria against Prussia. As a result of the Peace of Prague 1866, the German Confederation was dissolved; Prussia annexed Schleswig, Holstein, Frankfurt, Hanover, Hesse-Kassel and Nassau; and Austria promised not to intervene in German affairs. To solidify Prussian hegemony, Prussia and several other North German states joined the North German Confederation in 1867; King Wilhelm I served as its President, and Bismarck as its Chancellor. Bismarck had originally managed to convince smaller states like Saxony, Hesse-Kassel, and Hanover to join Prussia against Austria, after promising them protection from foreign invasion, morale unity, and fair commercial laws.

The uniting of Germany came about after the Franco-Prussian war where the French were basically annihilated within 6 weeks of action; because of this many states in Germany that hadn’t previously joined the Zollverein now felt that it was the right time to join, because of them joining the crown of being emperor of Germany was being offered to the king of Prussia who accepted unlike his predecessor simply because he was being offered the crown by the states and so was continuing the autocracy. Crucially this time it wasn’t by the Frankfurt Parliament last time, where the King felt rightly that this was a step down as he was being put there by the people and if he did something wrong the people could equally remove him from the throne.

Bismarck over the 10 years had helped extensively to build the Prussian empire and cleverly outmaneuvered many people such as Austria when the Austrian and Prussian armies had collectively beaten the Danes, and when it came to the administering of the states Bismarck surrounded the Austrian state between two Prussian states so this state was ultimately useful if a war came along.

A crucial thing that Bismarck sparked but by no way was the outright cause as he never knew how the French were going to react to the Ems telegram. A suitable premise for war arose in 1870, when the German Prince Leopold ofHohenzollern-Sigmaringen was offered the Spanish throne, which had been vacant since a revolution in 1868. France blocked the candidacy and demanded assurances that no member of the House of Hohenzollern becomes King of Spain. To provoke France into declaring war with Prussia, Bismarck published the Ems telegram, a carefully edited version of a conversation between King Wilhelm and the French ambassador to Prussia, Count Benedetti. This conversation had been edited to provoke France in to declaring war, but by the French declaring war the Prussia and could now say that it was a defensive war in their case.  Because France was seen as the aggressor may of the allies never got involved and the states of Germany were called upon to join the Prussians and this sparked a national outcry that was the first thing that had happened as a United Germany.

Bismarck’s policy was always a aggressive one to improve the standards of Prussia and to quickly improve the manufacturing in Prussia, but the allegation that he always wanted a war against the French and the Austrians is baseless and can never really be proved and can only really be answered by Bismarck himself.

Bismarck was a clever chess player type person but by no means knew how other countries would react to his moves and so everything can’t be blamed on Bismarck and his policies.