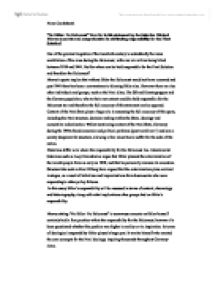 No Hitler: No Holocaust How far is this statement by the historian Michael Marrus accurate and comprehensive in attributing responsibility for the Final Solution?

"No Hitler: No Holocaust" How far is this statement by the historian Michael Marrus accurate and comprehensive in attributing responsibility for the Final Solution? One of the greatest tragedies of the twentieth century is undoubtedly the mass annihilation of the Jews during the Holocaust, with over six million being killed between 1939 and 1945. But for whom can be held responsible for the Final Solution and therefore the Holocaust? Marrus's quote implies that without Hitler the Holocaust would not have occurred and post 1945 there has been a convenience to blaming Hitler also. However there are also other individuals and groups, such as the n**i elites, The SS and Einzatzgruppen and the German population, who to their own extent could be held responsible for the Holocaust too and therefore the full accuracy of this statement can be opposed. Context of the n**i State plays a huge role in assessing the full accuracy of this quote, including the n**i structure, decision making within the State, ideology and cumulative radicalisation. Whilst mentioning context of the n**i State, Germany during the 1930s faced economic and political problems (post world war 1) and saw a society desperate for structure, allowing a few minorities to suffer for the sake of the nation. Historians differ as to where the responsibility for the Holocaust lies. Intentionalist historians such as Lucy Dawidowicz argue that Hitler planned the extermination of the Jewish people from as early as 1918, and that he personally oversaw its execution. ...read more.

So therefore the elites responsibility can be seen only at an extent as they, although directly involved in most instances, were simply minipulating the state that Hitler was prividing them and were part of a system and process of their time. It could also be argued whether they were doing it at their own free will or because they felt fear within their own position. The n**i elites full responsibility can be seen again to an extent limited, because they were supported by the SS and Einzatzgruppen. A wide range of German soldiers and officials, were in some way involved in the Holocaust, from units of the SS and the Einzatzgruppen. The SS were and elite group full of enthusiasm and creativeness, and held responsibility within running the camps and extermination centres and though there was no single military unit in charge of the Holocaust, the SS under Himmler was the closest. From the SS came the Einzatzgruppen killing squads who, along with many other achievements, occupied East Europe and often went beyond their given orders. Both groups provided concentration camp guards, ran prison camps, helped form the ghettos and substantially used slave labour, all of which led up to the Holocaust and therefore adds to their part played within the responsibility for the Holocaust. They both also participated directly far more then any other group, including the Wehrmacht, or regular German army. ...read more.

Marrus's quote is not comprehensive but in someways to a certain extent it is accurate. Accurate in a sense that although Hitler was at a distance and indirectly involved in some circumstances, people on the front and directly involved, such as the Nazie elite, the SS and the Einzatzgruppen and ofcourse the German population, although working at their own free will on most occasions were working up to Hitler's ideology and therefore he is responsible. The assessments that have been drawn in this essay from the other groups involved, that could be all held responsible to their own extent, certainly mitigate against Hitler's own responsibility for the Holocaust, however each assessment reflected and linked back to Hitler, providing more evidence of Hitler's slightly higher level of responsibility. On the whole it can be seen that Hiler did not actually originate the details of policy and neither did he play a direct role within the n**i state, therefore Marrus's quote is not comprehensive in attributing responsibility for the Final Solution. His quote implies total responsibility for Hitler on the debate over the Final Solution when that is clearly not fully accurate as in contradiction to his quote is the evidence of other groups involved within the Holocaust and the views of different historians. In overall judgement, this statement by Marrus is to an extent accurate in attributing responsibility for the Final Solution, yet less comprehensive in doing so. Fiona Crookshank ...read more.