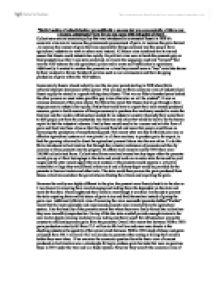 Stalin's policy of collectivisation was politically a success but was economically a failure and a human catastrophe how far do you agree with this point of view?

"Stalin's policy of collectivisation was politically a success but was economically a failure and a human catastrophe" how far do you agree with this point of view? Collectivism was an economic policy that was introduced in communist Russia in 1928 it's economic aims was to increase the governments procurement of grain, to increase the grain harvest , to increase the amount of grain that was exported for foreign currency and free people from agricultural industries to work in urban areas instead. All theses aims combined was to try and ensure that Russia could industrialise rapidly. Its political aims were to break the peasants grip on food production so that it was state controlled, to remove the unpopular capitalist "element" that was the NEP scheme the old agricultural policy and to create self-sufficiency in agriculture. Additionally it wanted to weaken the peasants as a class they weren't seen as "true" socialists shown by their resistant to former Bolshevik policies such as war communism and their dropping production of grain within the NEP system. Economically Russia altered radically over the ten year period starting in 1928 when Stalin achieved absolute dominance within power. This was due to Stalin economic aims of industrialised Russia rapidly he stated in a speech talking about Russia "That we are fifty to hundred years behind the other powers we must make good this gap in ten otherwise we will be crushed". ...read more.

the shocking reduction the quantity of the animal stock between 1928 to 1933 stock of sheep and goats collapsed from 146.7 million to 50.2 million due to peasants either eating or killing their animals before they were taken. If we examine the economic question from the basic view of amount produced collectivisation was a catastrophe failing to produce grain harvests that were as good a*s those in 1917 under the Tsar and in a feudal system. However they weren't the economic aims of Stalin. All Stalin's aims around collectivisation revolved around one key feature the ability to procure a far greater amount of grain for the state to be able to export and for it to be able to supply the cities with a reliable supply of cheap grain. With collectivisation as the entire process from production to supply was state controlled this meant that Stalin could take the acquired grain to export for foreign currency to start the great industrialisation and supply the cities with cheap grain even when grain production was being reduced. This was achieved because the people who produced the grain were placed on the lowest priority for grain distribution meaning that as grain harvest dropped it wasn't the exports that were dropped or supply to cities it was grain to the peasants that failed to be produced causing massive man made famines in the "breadbasket" of Europe around the area of Ukraine. ...read more.

As even though there was vast industrial economic progress it was gained at a too greater cost to the agricultural sector of the economy and it caused there to be a fundamental flaw in the soviet economy. The human cost was and always will have been massive in a system which placed a particular sector of societies needs so far below every other priority and gave them no ability to deal with the crisis themselves as it forced them to depend on the system which had only contempt for them. But the policy meant that Stalin achieved his aims and did provide a massive leap in the standard of living for the majority of Russians and turned Russia into a super power in only ten years which is a political achievement which is miraculous. This explains why eye witness accounts differ so wildly from "He was the defender of the working people..... a great leader" to "He was not a man.... but a devil". Reflecting different view points. This divide represents clearly the vast and altering effects that collectivisation had and whether you view it as a success or failure depends on whether you rate vast industrialisation a benefit great enough to justify huge human cost and whether you believe economic success for one segment of society can ever be counted as an overall economic success for a state as a whole. ...read more.