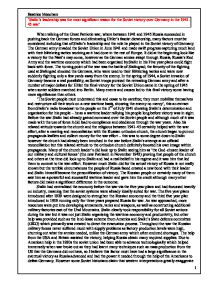 Stalins leadership was the most significant reason for the Soviet victory over Germany in the 1941-45 war Discuss.

'Stalin's leadership was the most significant reason for the Soviet victory over Germany in the 1941-45 war' When talking of the Great Patriotic war, where between 1941 and 1945 Russia succeeded in pushing back the German forces and eliminating Hitler's fascist dictatorship, many factors must be considered including that of Stalin's leadership and the role he played in the Soviet victory of Germany. The German army invaded the Soviet Union in June 1941 and made swift progress capturing much land with their blitzkrieg tactics working as it had done in the rest of Europe. It did at the beginning look like a victory for the n**i's may come, however as the German armies swept through Russia, Russia's Red Army and the wartime economy which had been organised by Stalin in his Five year plans could fight back with force. The turning point of the war was the battle of Stalingrad; the ferocity of the fighting used at Stalingrad shocked the Germans, who were used to their Blitzkrieg tactics and were now suddenly fighting only a few yards away from the enemy. In the spring of 1944, a Soviet invasion of Germany became a real possibility, as Soviet troops pursued the retreating German army and after a number of major defeats for Hitler the final victory for the Soviet Union came in the spring of 1945 when soviet soldiers marched into Berlin. Many events and causes led to this final victory some having more significance than others. ...read more.

However some Soviet historians claim that western interpretations greatly exaggerate the impact of western support and state that the Red army and their abilities had the prime importance when it came down to the defeat of Germany. Stalin's organisation before the war however has been criticised and his desperation to avoid war leading to an alliance with Hitler in 1939 meant that he avoided all the obvious signs that the German forces would invade the Soviet Union, 'It is one of the inexplicable things about him that he remained blind to the fact that Hitler's clear intention was to invade and occupy Russia.'. The purging of many generals and commanders from 1937-41, who had wanted to prepare for war had a great effect on the war, cutting many successful military leaders 'the soviet armies had been decimated by the pre-war purges in their ranks, and they crumbled under the face of the n**i onslaught'. Also it has been argued that Stalin even had a mental breakdown in the first few weeks of the war but a lot of evidence points away from this now, because even though Stalin retreated making Molotov (one of Stalin's powerful colleagues) make the radio broadcast announcing the German invasion it is believed Stalin was still very active in this period. Some historians such as Kravchenko believed that Stalin and his regime had no part to play in the victory over Germany, he believed 'the whole organization...was caught in the mighty surge of patriotism that came up from the profoundest depths of Russian history... ...read more.

The n**i atrocities and behaviour in occupied countries certainly did have a significant impact on the German defeat - as it lost them many fighters that could of helped against the mass of Russians they were fighting against. I believe as Richard Overy does, that 'the war effort was not the product of one man, nor could it be made to bend entirely to Stalin's will', such a mass amount of factors effected the soviet victory and the German's defeat and it was a combination of all of these which brought Russia to success. The most significant therefore is rather difficult to pin-point and whether it was Stalin's wartime leadership or just pure luck on the Russians side collectively tying up all these factors led to the USSR winning the war and the n**i invasion in 1945, bringing Russia into the centre of European discussion and becoming one of the two world's greatest superpowers. A large number of historians have argued of the significance of the factors leading to the victory and many have conflicting views but for me Stalin's leadership wasn't the most significant, certainly it played a part but I think the most significant was the weakness of the German army and this link with how unprepared they were for the weather conditions and terrain of the soviet union, these combining factors meant that Russia and its help from the Serbs who had equipment and skills for winter fighting could make great advancements leading to the retreat of German soldiers from outside Leningrad and the eventual victory in 1945. ?? ?? ?? ?? Beatrice Meecham 1 ...read more.