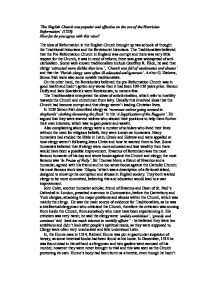 The English Church was popular and effective on the eve of the Henrician Reformation (1529)How far do you agree with this view?

'The English Church was popular and effective on the eve of the Henrician Reformation' (1529) How far do you agree with this view? The idea of Reformation in the English Church brought up two schools of thought: the Traditional historians and the Revisionist historians. The Traditionalists believed that the Pre-Reformation Church in England was corrupt and there was very little respect for the Church, it was in need of reform; there was great widespread of anti-clericalism . Some well-known traditionalists include Geoffrey R. Elton, he said that clergy 'attracted more dislike than love', 'Church was full of weaknesses and abuses' and that the 'Parish clergy were often ill-educated and ignorant'. Arthur G. Dickens, Simon Fish were also some notable traditionalists. On the other hand, the Revisionists believed the pre-Reformation Church was in good health and hadn't gotten any worse than it had been 100-150 years prior. Eamon Duffy and Jack Scarisbrick were Revisionists, to name a few. The Traditionalists interpreted the ideas of anticlericalism, which refer to hostility towards the Church and churchmen from laity. Usually this involved ideas that the Church had become corrupt and that clergy weren't leading Christian lives. In 1529 Simon Fish described clergy as 'ravenous wolves going around in shepherds' clothing devouring the flock' in his 'A Supplication of the Beggars'. ...read more.

Parliament was used to attack rights of sanctuary; criminals could claim rights of sanctuary while they resided inside a church, where they couldn't be arrested. Disputes about the Church's legal position led to the Standish case in 1515. This was were Friar Standish, backed by Parliament, attacked the benefit of the clergy which wasn't very popular with bishops. The King was called in to settle the dispute which led to a debate about the powers of the Church and the State. The King reminded the audience that English Kings were subject to no earthly superior - 'We are King of England and kings of England, in time past, have never had any superior but God alone' - the implication of this was that the King was in charge of the Church of England, not the other way around. The pope issued a decree, in 1514, which said that no layman had authority over a church man, however this was a dead letter in England. However there was some evidence to discount traditionalist views; abuses within the Church weren't widespread; most clergy did they job well and only a minority didn't. the Church made an effort to put itself in order. In 1530, the Bishop of London, John Stokesley, conducted a personal examination for the curates in his see. ...read more.

They believed it was fine and nobody wanted it to change as laity were happy with it. I believe the English Church wasn't in need of reform on the eve of reformation for many reasons. This was mainly because English laity were happy with the Church and its clergy. The Pilgrimage of Grace in 1536 was a demonstration against destruction of the monasteries, laity didn't want them to go as they preferred them. If they thought the Church was in need of reform then they wouldn't have minded them going. Also, laity were happy enough to pay money towards the Church, such as the payment of �305 towards building a new steeple for Church in Louth, which took fifthteen years to complete, people were dedicated to the Church and want to make them look good; they wanted to be proud of their Churches and show others how good they were. Many also left money in their wills towards the church. Also the parishes and churchmen seemed to be fulfilling their vows and didn't seem to be corrupt. Only a few odd ones out were corrupt and that seemed to be a minority of priests. People followed religion and it was a part of their daily lives, with many escaping their own lives to be in Church. Nobody wanted reformation of the Church, even the Church critics, they just wanted reform and improvements. ?? ?? ?? ?? ...read more.