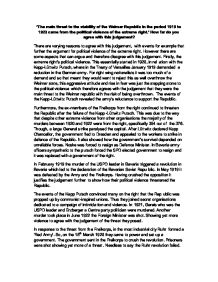 The main threat to the stability of the Weimar Republic in the period 1919 to 1923 came from the political violence of the extreme right. How far do you agree with this judgement?

'The main threat to the stability of the Weimar Republic in the period 1919 to 1923 came from the political violence of the extreme right.' How far do you agree with this judgement? There are varying reasons to agree with this judgement, with events for example that further the argument for political violence of the extreme right. However there are some aspects that can argue and therefore disagree with this judgement. Firstly, the extreme right's political violence. This essentially started in 1920, in relation with the Kapp-L�ttwitz Putsch, where in the Treaty of Versailles January 1919 demanded a reduction in the German army. For right wing nationalists it was too much of a demand and so that meant they would want to reject this as well overthrow the Weimar state, this aggressive attitude and rise in fear was just the stepping stone to the political violence which therefore agrees with the judgement that they were the main threat to the Weimar republic with the risk of being overthrown. ...read more.

In May 1919 it was defeated by the Army and the Freikorps. Having crushed the opposition it justifies the judgement further to show how their political violence threatened the Republic. The events of the Kapp Putsch convinced many on the right that the Republic was propped up by communist-inspired unions. Thus they joined secret organisations dedicated to a campaign of intimidation and violence. In 1921, Gareis who was the USPD leader and Erzberger a Centre party politician were murdered. Another murder took place in June 1922 the Foreign Minister was shot. Showing yet more violence to agree with the judgement of the threat they posed. In response to the threat from the Freikorps, in the most industrial city Ruhr formed a 'Red Army'. So, on the 15th March 1920 they came to power and set up a government. The government sent in the Freikorps to crush the revolution. Prisoners were shot showing yet more of a threat. Needless to say the Ruhr revolution failed. ...read more.

They would then disband the police and army and create militias. This was a big threat from the left. The most important outcome showed the threat of the revolutionary left, and that was that it deflected attention from the 'main threat.' The perceived threat of left wing revolution made many believe in the late 1920s, yet the views of the right that the Republic was based around a weak government and needed to be put into place. In conclusion, the entirety of the threat from the right was extremely provoking in terms of the Freikorps and the army to help justify a physical threat as well as the murders explained before. Not only that, but the concept of the right being the main threat is justified by the fact that the left weren't really much of a threat if any, despite the revolutions and the efforts, but these were just crushed by the extreme right. The political violence of prisoners also highlights this, the fact that the left or any other uprisings that corresponded to the murders were miniscule in comparison. These points exaggerate the effects of the right and therefore agree further with the judgement itself. ...read more.